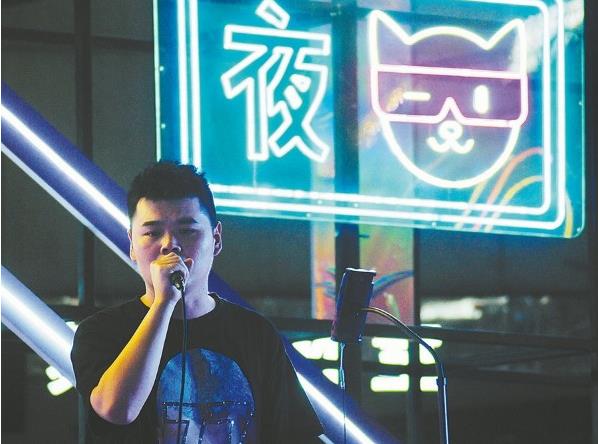 Xu Yang was among the project's first participants. In the day, the 27-year-old is an office worker for a consultancy company and at night, he's better known as "singer Jeremy".

"I read about the project in a newspaper, and decided to sign up at once. Being a star has been my dream since childhood," says Xu, who was born in Shanghai, where his grandfather was a professor of music and his grandmother was the leader of a local song-and-dance troupe.

"My parents loved singing, too, and they bought a home karaoke system in the 1990s, so I started to sing when I was only 3 years old,"Xu says.

He recalls his busy schedule at the beginning when he went to sing at 96 Plaza three or four times a week, because not many people knew of the project.

"After work, I'd drive one hour from my company in Songjiang district to the plaza, and started to sing right away, but I didn't feel tired," he says. "Singing is always something I enjoy, and I feel recharged when I go home after the performance."

Xu also signs up now and then for singing competitions, and last year he finished 23rd in a national contest, Oriental Music Challenge.

"In a contest, the performance is more about showing off singing skills to the judges, but here on the open-air stage, my songs are for myself and people who pass by and happen to share my taste. I sing all kinds of love songs, sometimes sweet ones and sometimes heartbreaking," Xu says.

More and more people are joining the project and becoming friends. On the last Saturday of August, Xu sang a duet with Zhang Xu, who is a nurse and has the stage name "Xizi".

"I got to know Xu in a theme show in October," Zhang says.

"We were in a team to perform traditional Chinese songs, and we all wore traditional clothes. He was our team leader and supported me when I was in a poor state and helped me grow in confidence onstage."

Zhang has performed in her hospital annual party, but the show with Xu Yang was her public debut.

"I felt very happy when many people stopped to listen to my songs on a cold winter night," she says.