Editor's note: China has seen tremendous changes nationwide, from economic growth to environmental protection, from social improvement to cultural progress. In this series, China Daily maps the changes and tells the stories of the people who lived through them.

When economic activity in Shanghai began to recover after the epidemic-related lockdown of the city earlier this year, Singapore's United Overseas Bank Limited announced plans to set up a branch in the Lin-gang Special Area of the China (Shanghai) Pilot Free Trade Zone, which will make it the first overseas bank with physical operations in the section of the Shanghai FTZ that opened in August 2019.

To ensure the opening scheduled for the third quarter of the year takes place, the Lin-gang administrative committee has helped the UOB locate office space and find suitably qualified employees despite the recent outbreak, said Yuan Quan, the head of the UOB China's Transaction Banking Department.

By providing services such as cross-border capital management and trade settlement, the UOB will facilitate the internationalization of Lin-gang based companies, he said.

The examination of antiques and fine artworks at the FTZ was similarly unaffected. According to Hu Huanzhong, chairman of the Shanghai Free Trade Zone International Culture Investment and Development Co Ltd, about 400 antiques and artworks with a value of $77 million were examined by the Shanghai Customs District between March and May, on par with pre-epidemic levels.

Credit for this is due to favorable policies introduced in 2018. A remote customs inspection station was built in a warehouse at the FTZ's bonded service center, permitting inspections to be conducted on site, preventing risks posed by additional transportation, and allowing antiques and artworks to be delivered to auction houses, art institutions and collectors more efficiently, Hu said.

"This is a reflection of the many innovations the Shanghai FTZ has launched in the past few years to facilitate the trade in art. The approval time for imports and bonded exhibitions, for example, has been shortened from 20 days to five," he added.

Thanks to the changes, the art trade has grown swiftly, reaching an all-time high of 17.59 billion yuan ($2.6 billion) in imported and exported artworks last year, a five-fold increase since the inauguration of the FTZ in 2013.

This is just one snapshot of the many favorable policies introduced.

More than 120 innovative measures, such as the introduction of free trade accounts integrating the use of renminbi and foreign currencies to facilitate international trade, have been first adopted at the FTZ and promoted nationwide under the guidance of government bodies such as the Ministry of Commerce.

"Systematic innovation is not just a highlight of the Shanghai FTZ but, more importantly, is also its long-term mission," said Zhao Xiaolei, director of the FTZ Research Institute at the Shanghai University of Finance and Economics.

Of all the measures and policies subsequently adopted by the rest of China, the FTZ's negative list mechanism undoubtedly takes center stage. Sectors not included on the list are open to foreign investment, attracting leading multinationals to the Chinese market.

The 190 investment categories included in the first version of the list implemented in 2013 dropped to 158 when the mechanism was adopted nationwide in late 2018. At the end of last year, the number was slashed to 27, greatly reducing restrictions on foreign investment.

More importantly, 20 more FTZs have been created based on the success of the Shanghai FTZ. According to the Ministry of Commerce, the country's 21 FTZs attracted 213 billion yuan in foreign investment last year, an increase of 19 percent year-on-year, and the value of imports and exports stood at 6.8 trillion yuan, accounting for 17.3 percent of the national total.

"The 21 FTZs, which take up less than four-thousandths of China's area, have made huge contributions to the country in terms of stabilizing foreign investment and trade," Guo Tingting, director-general of the Comprehensive Affairs department at the Ministry of Commerce told a news conference in late January.

Launched with an initial area of 28.78 square kilometers nine years ago, the Shanghai FTZ has undergone two expansions and now covers 240 sq km.

The city's growth over the past decade is a testimony of its development. According to the Bank of China, thanks to the FTZ's contribution to finance, trade, shipping and technology, Shanghai has become home to the regional headquarters of 831 leading multinational companies, up from just 445 when the FTZ was launched in 2013. The value of foreign investment in Shanghai hit a record $22.55 billion last year, up from $16.78 billion at the end of 2013.

More progress is anticipated. Shanghai Mayor Gong Zheng told a meeting in early June that efforts should be made to further relax market entry regulations at the Shanghai FTZ to advance offshore trade. The zone should become a place where technological breakthroughs are nurtured and scientific research is industrialized.

"High-level systematic opening-up should always be a major feature of the Shanghai FTZ, which should serve as the test field for China's deepened reform and opening-up efforts," he said.

According to Quan Heng, an economist at the Shanghai Academy of Social Sciences, the role of the municipal government has changed since the launch of the FTZ. It has relaxed its grip when appropriate and has provided better services, leading to an overall improvement in Shanghai's business environment.

The number of experiments pioneered in Shanghai and later adopted nationally has helped the development of all the country's other FTZs.

"Serving as a pioneer in facilitating the advancement of major national strategies has been a feature of Shanghai's socioeconomic development in recent years. By adopting innovative development models at the FTZ, Shanghai has been able to explore a number of new paths toward development," he said.

More efforts should be made to further facilitate investment, trade, capital flow, transportation and employment at the FTZ to ensure Shanghai better fits the global development paradigm and remains abreast of new trends in international trade and investment, Quan said. 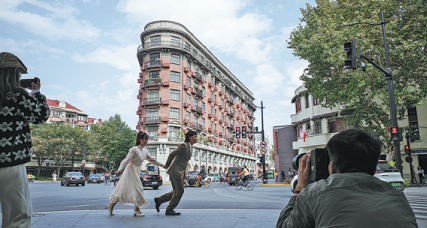 A couple take pictures in front of an old building in Shanghai last year. ZHANG HAOFU/XINHUA 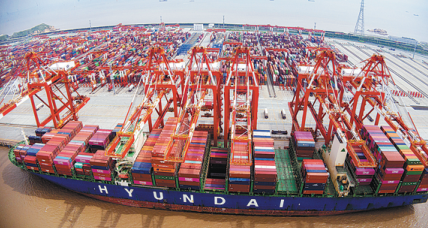 Containers get loaded on an automated wharf at a port in the megacity. JI HAIXIN/XINHUA 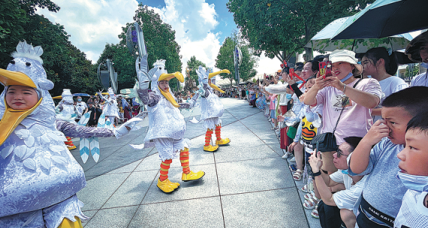