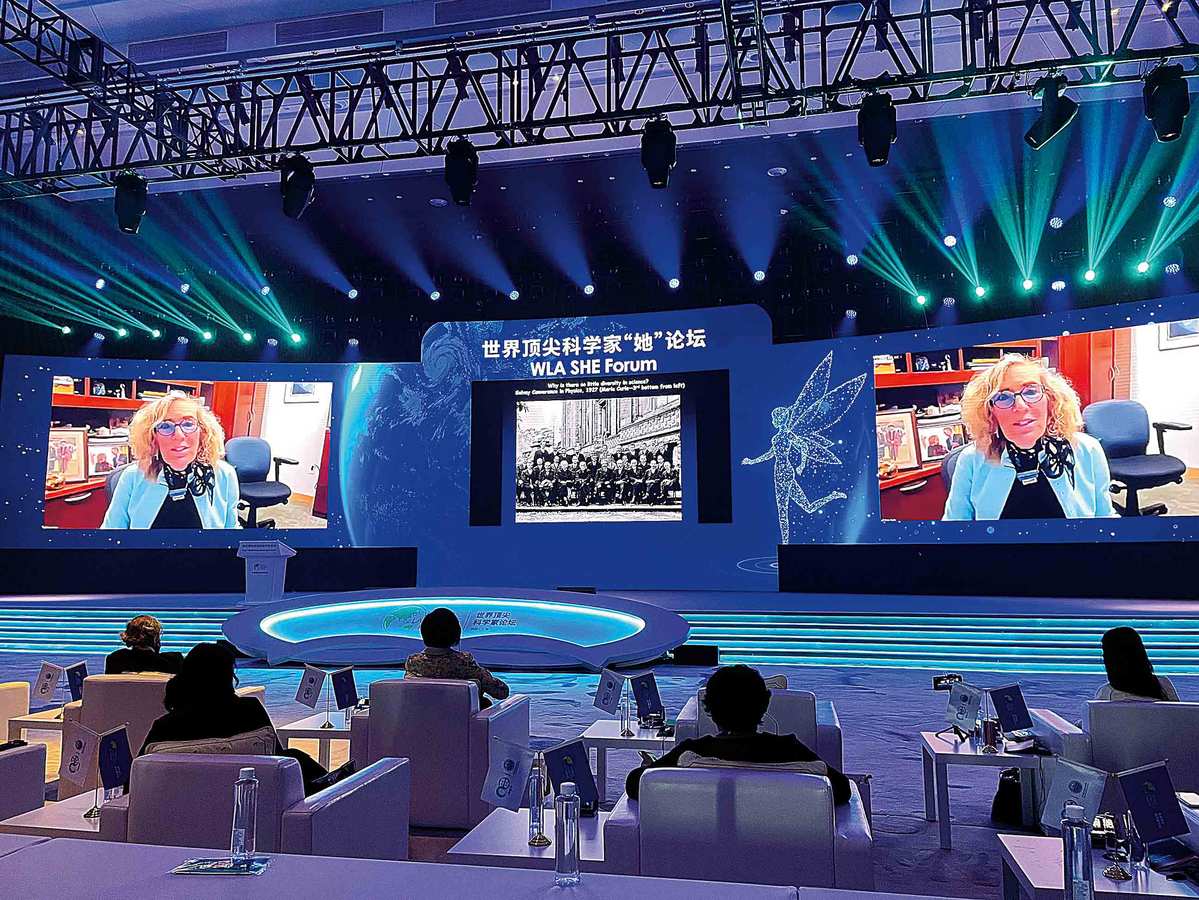 Elaine Fuchs, a cell biologist and winner of the 2020 Canada Gairdner International Award, talks about improving gender equality in the STEM world at the World Laureates Association's SHE Forum held in Shanghai on Tuesday. ZHOU WENTING/CHINA DAILY

At forum, need for women to become more engaged in STEM promoted

At a forum for the scientific community held in Shanghai on Tuesday, some of the world's top female scientists announced an initiative encouraging worldwide institutions in all arenas and at all levels to develop strategies to promote gender equality in STEM areas.

Girls and young women should be as equally engaged in STEM－science, technology, engineering and mathematics－education at primary and secondary schools as their male counterparts, as well as in technical and vocational education and training, rather than feeling that science is exclusive to men, they said at the Fourth World Laureates Forum.

"To achieve that, role models of women scientists need to be better represented on important international stages and allow their voices to be heard, as a way to encourage youths to see women can fulfill their potentials in science arenas as well," said Lenore Blum, a member of the United States National Academy of Sciences.

She also stressed that gender equality is vital in these women's career progression, in STEM-based entrepreneurship and in innovation activities so female scientists don't risk leaking out of the STEM pipeline.

Blum, who is also a professor of computer science at Carnegie Mellon University, joined the World Laureates Association's SHE Forum, part of the overall event, via video linkup. It was the first time that a forum themed on women had been held at the annual gathering.

Michael Levitt, vice-chairman of the World Laureates Association, which jointly hosted the forum with the China Association for Science and Technology, said that when the world is undergoing rapid changes, including in technologies like smartphones and artificial intelligence, it is the right time for both genders to think about redefining the world.

"In particular, women can think about how they can redefine the world more to their favor. Women and their contributions are never neglectable in the world of diversity but have long been dominated by men. Diversity is so important, as the future is always unknown," Levitt said.

In today's science fields, conscious and unconscious bias toward women is still ubiquitous.

Lynne Maquat, who won the 2021 Wolf Prize in Medicine, said, "Very often, women's views are not taken seriously, but when reiterated by a man, it's often the man gets credit for the view."

Also, there are surveys showing that for the same qualifications, a man is often deemed more accomplished and is typically the first choice for a job position.

A double-blind study of more than 120 scientific research leaders in the US showed that when rating application materials of a student, who was randomly assigned either a male or female name, for a lab manager position, they rated the male applicant as significantly more competent and hirable than the identical female applicant.

"Everyone in their respective leadership positions can kick off changes to make things happen. They can think about if their institutes have equal pay for equal work, and if they have a good gender balance of plenary speakers when organizing scientific meetings," Maquat said.

Born in 1927, Ye Shuhua, an astronomer and member of the Chinese Academy of Sciences, said that women have special characteristics that help make society better.

"Women need to showcase their capabilities, and when they do things well, they'll be more encouraged to be more confident and stand out so their voices can be heard," said Ye, who is also honorary director of the Shanghai Observatory of the CAS.

Over the years, women's position in China's society has increasingly improved－in some ways, even better than in the West, she said.