Pudong reaches for the sky with its high life 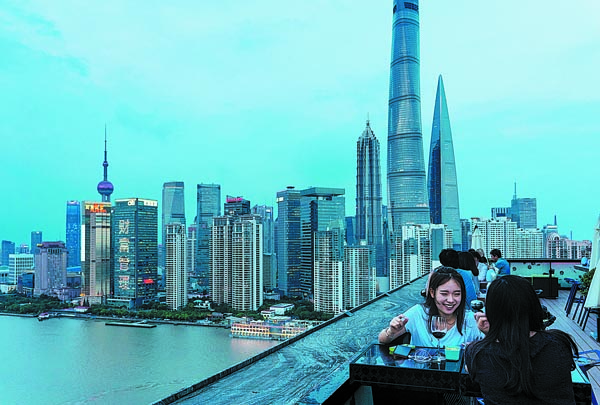 Pudong boasts the most skyscrapers in Shanghai and is a symbol of the city's prosperity and financial power. [PHOTO BY GAO ERQIANG/CHINA DAILY]

Pudong, which refers directly to the eastern bank of the Huangpu River, used to be, quite literally, a pretty common place in Shanghai 30 years ago.

Back then, the Lujiazui area on the Pudong side of the river, which now has the most skyscrapers in the city and is a symbol of Shanghai's prosperity and financial power, had nothing except fields.

So, in the early 1990s, when Xie Guoping was working in a newspaper whose office near the Bund, he had no interest in the land across the river.

Sometimes when Xie strolled along the Bund and appreciated the row of historical buildings, homes to banks and financial institutions, he could not help but wonder why the development gap between Pudong and Puxi (the west bank) was so big.

But what happened since was beyond Xie's imagination－Pudong developed so fast over the past three decades and, in July, the State Council issued a guideline to build Pudong into a leading area for socialist modernization, a showcase of the country's high-level reform and opening-up.

And Xie is not a bystander to this miraculous transformation. In 2002, he was assigned to work as deputy editor-in-chief for the Pudong district's newspaper Pudong Times, and he has written three books on Pudong's development since then.

"Every day, I read and edited reports about things that were happening in Pudong, so I thought I should write a book to chronicle this historical process," Xie says.

He started to jot down stories, his observations and thoughts on interviews he had conducted, which become the basis for his first book, Rising Star of the East, published in 2010.

"After reading my book, one scholar from Shanghai University told me that I should translate it because foreigners will be interested in the story of Pudong," he recalls, adding that in 2013, Zhao Qizheng, the former vice-mayor of Shanghai, encouraged him to continue to write on the subject.

Zhao has served the director of the management committee of the Pudong New Area from 1991 to 1998, and played an important role in the early years of the area's development.

It inspired Xie to write the second book, The Story of Pudong: A Dream Come True, which was published in both Chinese and English in 2015.

The book includes one chapter, entitled "Mr Pudong", dedicated to Zhao, recounting many stories of Zhao's involvement in the planning and the promoting of Pudong to the world.

One such story took place in 2008, when Zhao was promoted to chairman of the foreign relations committee of the Chinese People's Political Consultative Conference.

During a speech in Shanghai, a reporter asked him what he thought the golden rule in developing Pudong was. Zhao replied without hesitation, "Cherish the land as if it were gold."

Although investors came in great numbers after Pudong was formally established as an administrative region in 1993, Zhao believed that the development should be well planned, so that architects could design buildings that would stand for at least a hundred years.

Zhao hung a calligraphic reproduction of the "golden rule" in his office so that everyone who came would see it, and the government has been carefully selecting each investment project ever since. Even projects like Shanghai Disneyland were approved after a long period of discussion and evaluation.

Zhao suggested that the city should leave space for development by future generations, so many areas in Pudong were reserved for that purpose in the 1990s and early 2000s.

In July, the 13,000-square-meter Museum of Art Pudong, in the shape of a white cube and designed by renowned French architecture firm Ateliers Jean Nouvel, was finally opened to the public.

The museum stands on one of the best lots in Lujiazui, which is right on the riverside and directly faces the Bund. Standing next to the Shanghai International Convention Center that held the APEC Summit in 2001, the land was left untouched until the construction of the museum began in 2017.

In 2015, Shen Xiaoming, the former Party head of Pudong district, said during the radio program Citizens and the Society that Pudong has seen a lot of economic progress after 25 years of construction, but it has lagged behind in aspects of culture and sport.

"The lot near the Oriental Pearl TV Tower and the convention center was the most valuable one in the small Lujiazui area," he says, adding that despite many developers bidding for that piece of land, the government wouldn't sell it for any other uses, reserving it for a museum for the citizens.

By the end of this year, the 115,000-square-meter Shanghai Library's Pudong branch will open to the public.

The 105,000-square-meter eastern branch of Shanghai Museum in Pudong will also start interior decoration and exhibition curation, and is expected to open by the end of next year.

Recently, Xie received the English copy of his third book, The Legend of China: The History Of Pudong Development, which was translated and published by World Scientific Publishing, an academic publisher in Singapore, in January.

In the 400-page book, Xie retraced the history of Pudong back to as far as the Tang Dynasty (618-907), but focused on the last 30 years as well as envisioning the area's future.

"The big construction projects in Pudong have reached their final stage, but its opening-up is still on a fast track," says Xie, who is often invited by the government to give classes to officials from other provinces who come to learn about the Pudong experience.

"The establishment of the China (Shanghai) Pilot Free Trade Zone in 2013, its expansion in 2019, and the recently issued guidelines for Pudong to be a pioneer of China's higher level of reform and opening-up all point to the same direction," he says.