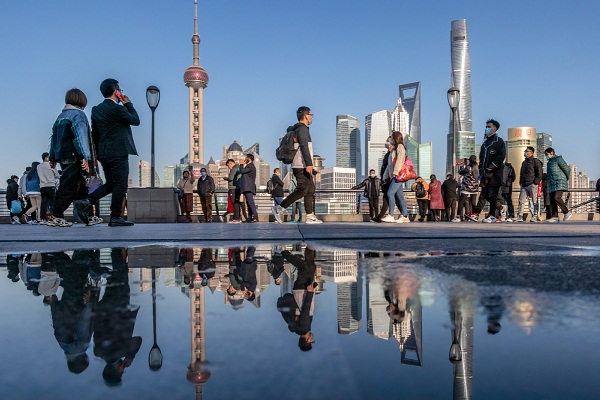 Share prices of companies with businesses related to the Pudong New Area surged on Tuesday following reports that the eastern part of Shanghai will pioneer China's higher level of reform and opening-up.

A-share companies with businesses related to China (Shanghai) Pilot Free Trade Zone, which is located in Pudong, rose by 2.86 percent on Tuesday.

A draft of a decision authorizing the Shanghai Municipal People's Congress and its standing committee to make laws on Pudong New Area was submitted to the Standing Committee of the 13th National People's Congress, China's top legislature, for review on Monday.

The laws that will be implemented in Pudong will have equal status as laws in a special economic zone, according to the Constitution and Law Committee of the National People's Congress.

According to Shanghai's comprehensive transportation development plan for the 14th Five-Year Plan period (2021-25) which was released by the municipal government on Tuesday, Shanghai Pudong International Airport will undertake its fourth phase of expansion. One of the key investments will be in Lingang Special Area, part of China (Shanghai) Pilot Free Trade Zone located in the easternmost part of Pudong. By 2025, a transportation network will link Lingang and Shanghai Pudong International Airport in 15 minutes, and connect neighboring cities in the Yangtze River Delta region in 90 minutes, according to the plan.

Financial industry opening-up will be another highlight in Pudong. Crude oil option trading is expected to start at the Shanghai International Energy Exchange on June 21, and it will be one of the first set of option products available to overseas investors.

Zhou Zhengyu, deputy head of Pudong's technology and economic committee, said during a news conference earlier this month that six core industries: chipmaking, innovative drugs, commercial civil aviation, new energy vehicles, smart manufacturing and big data, have made noticeable progress in Pudong, especially in terms of industry scale, capacity and core technologies, during the first four months of the year. It is highly probable that the six industries will create additional industrial output of over 100 billion yuan ($15.6 billion) by the end of this year, he said.

According to Zhang Hui, deputy director of the financial bureau of Pudong New Area, the technology-focused STAR Market at the Shanghai bourse said 24 Pudong-based companies have been listed on the bourse as of June 7, which is 60 percent of the city's total. With a combined market value of over 750 billion yuan at present, these companies have raised 93.4 billion yuan via initial public offerings.