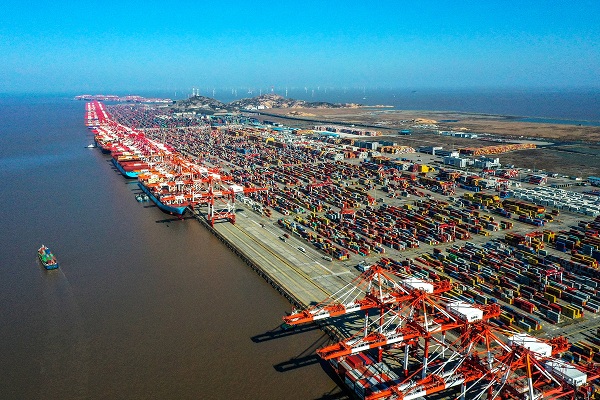 Yangshan Port in Shanghai, which will strengthen its capabilities to distribute products relating to intelligent manufacturing, integrated circuits and biomedicine. [Photo by Yao Feng/For China Daily]

Shanghai will launch a detailed plan to promote international trade in the city during the 14th Five-Year Plan period (2021-25), improve overall core competitiveness and advance a new round of opening-up, municipal government officials said on April 8.

The plan envisages giving Shanghai the required competitive edge to be a hub for international trade. It also aims to make the city a major import and export distribution center connecting the Yangtze River Delta region and serving the entire country.

Offshore and intermediary trade is another area that is expected to play a significant role in shaping Shanghai's fortunes in the next five years, Zong Ming, vice-mayor of the city, said during a news conference. To that end, banks will provide more convenience for foreign exchange transactions in the current accounts of companies in the city. Key areas such as China (Shanghai) Pilot Free Trade Zone and Shanghai Hongqiao Central Business District will be encouraged to come up with special tax policies to support offshore trade.

Yangshan and Waigaoqiao ports in the city will strengthen their capabilities for distributing intelligent manufacturing, integrated circuits and biomedicine products as well as bulk commodities, said Zong.

Efforts will also be made to advance the city's higher level of opening-up to make it a gateway for investment in the Asia-Pacific region. In this regard, more world-class industrial clusters should be set up in the city so that more services can be provided to multinational companies throughout their entire life cycle. Shanghai should also be home to more multinational companies' regional headquarters to better connect domestic and international markets.

Consumption is another major sector that the city plans to tap for boosting international trade for the next five years. Gu Jun, director of the Shanghai Municipal Commission of Commerce, said high-end consumption should be increased in the city via more global debuts of international brands, incubation of domestic brands and building consumption landmarks.

The total value of e-commerce deals realized in Shanghai reached 3 trillion yuan ($458 billion) in 2020, while the number was 1.7 trillion yuan in 2015, according to the municipal government. The city saw its total retail value rise to 1.6 trillion yuan last year, the highest in the country.

Efforts will also be stepped up to make the China International Import Expo, which will hold its fourth edition this year, more influential globally to upgrade trade, industries and consumption. Meanwhile, the construction of a modern logistics system should be carried out to make Shanghai the supply chain management center in the Asia-Pacific region. Innovation should be seen in terms of investment mechanisms for international trade to further improve the city's business environment, according to the plan.