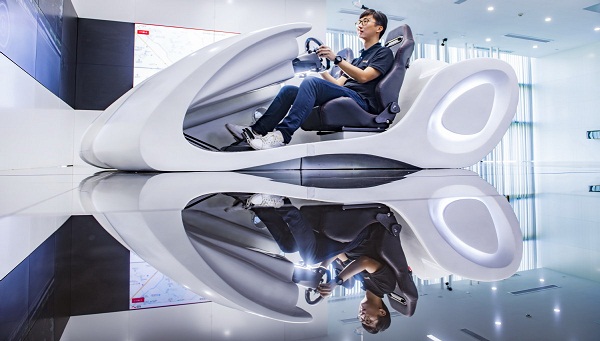 A technician from SenseTime tests an AI-powered vehicle in Shanghai on Sept 2, 2020. [Photo/China Daily]

Shanghai is expected to host an artificial intelligence-backed super computing platform by next year as the city pushes to use the technology for industry empowerment and urban management.

The New Generation Supercomputing Center located in Lingang Special Area at Shanghai's Pilot Free Trade Zone has recently completed construction, just half a year since the grand project kicked off.

The accelerated construction speed was made possible due to streamlined procedures by the Lingang Administrative Committee, which utilizes a joint online portal for civic affairs to handle enterprise affairs in an efficient manner.

SenseTime, the company behind the 5.6 billion yuan ($867 million) project, stands to benefit from this simplified approach, according to Pan Mingwei, who oversees the project at SenseTime.

"Government officials in Shanghai have put their heart and soul into the entire process of the project," Pan said. He added that accelerated paces are being witnessed throughout the entire process, from project commencement in July and obtaining a construction permit in September to roofing completion in December.

Xu Li, co-founder and CEO of SenseTime said: "The infrastructure project is in line with SenseTime's strategy to build a best-in-class artificial intelligence infrastructure for all industries. We hope that Sense-Time will be able to empower various industries and drive growth of the global economy, society and humanity toward a better tomorrow."

The company said the newly-completed center is expected to "significantly improve supercomputing power and the iteration efficiency of its proprietary algorithms".

To be more specific, the computing power of the platform can support simultaneous access to 8.5 million video channels. It also says it will be able to process videos equivalent to 23,600 years in a single day.

The new 58,000-square-meter facility will also create a supercomputing platform based on a deep-learning framework developed by SenseTime, which will offer highly customized, integrated and industry-leading AI solutions to customers from various industries.

Shanghai has spared no efforts in its ambitions to become a budding global AI powerhouse. For instance, a directive for Lingang Special Area decreed in December that AI and related industries should hit 90 billion yuan by the end of the 14th Five-Year Plan period (2021-25).

Many domestic and international AI powerhouses have flocked to set up shop in the metropolis. Last year witnessed the launch of a dedicated AI Tower hosting 20 leading AI firms on the West Bund waterfront in Xuhui district, an AI hub in the city.

They include industry giants such as Microsoft, Huawei and Alibaba as well as leading startups like United Imaging and Yitu.

The city's efforts to boost its AI prominence are also reflected in the World AI Conference, which was launched in 2018. Summoning AI luminaries from Nobel laureates to tech business owners like Elon Musk, the event has since developed into an influential platform for AI cooperation and exchanges, as well as a catalyst for the city's AI industry.