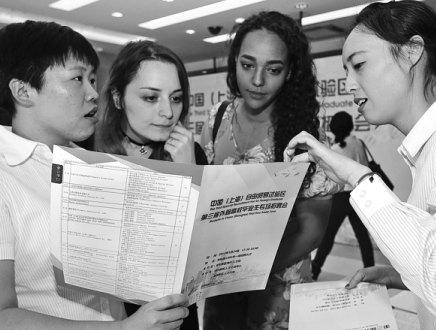 In 2014, Myanmar-born Colin Huang closed his fast-food restaurant in London and began a slow journey back to China, the country of his ancestors and a place he'd never visited. Now, six years later, Huang is comfortably ensconced in Pudong New Area, Shanghai, running his own business.

Although the 31-year-old started to learn Chinese as early as five, his closest link with China was his frequent visits to Chinatown in Myanmar and the United Kingdom.

Shortly after graduating from a university in the UK in 2014, Huang decided to go to China.

During his trip, Huang met his Singaporean business partner, and they decided to launch an intelligent management services company.

In 2015, Huang and his partner opened Prime Intelligent Facility Management in Pudong, which in 2017 was moved to its current location in the Lingang New Area－a newly included part of the China (Shanghai) Pilot Free Trade Zone.

"There was nothing there, except for a bunch of policies (supporting entrepreneurship)," Huang said.

"There are many more opportunities here than elsewhere. Its diversity, and perfect system are unparalleled. In the meantime, Lingang offers a tranquil environment for business startups, which allows us to focus on our business away from the hectic world," he added.

In the past three decades, Pudong has attracted 36,200 foreign-funded enterprises from 170 countries and regions. So far, 350 regional headquarters were moved or opened in Pudong by multinational corporations.

Weng said that in order to attract various talent for the further development of Pudong, the area launched a package of supportive policies including 35 measures to facilitate innovation and entrepreneurship of talented personnel. Hong Chow, CEO of Roche Pharma China, is one example.

Born in Wenzhou, Zhejiang province, Chow migrated to Germany with her family at the age of 12. After working and living in Germany, the UK, Singapore and China, Chow decided to settle down in Pudong in 2011, and joined Roche Pharma China in 2015.

Chow said her dream encouraged her to join the first multinational medical company that established a complete medical value industrial chain in Shanghai.

"This will enable Chinese patients to become one of the world's first batch of users for new medicines, and to make these medical products affordable for more and more Chinese patients," Chow said.

She describes Pudong as a hot spot for the research and development of innovative drugs and creative medical methodologies to benefit all Chinese patients.

She said her connections to China can be traced to 1997, when she became interested in learning Chinese language and culture. Then she decided to study Chinese as her major and looked for a job in China after graduation. She joined Germany-based Lenze Group in Shanghai in 2003, and was married to a Chinese man. Now they have a daughter that speaks both Chinese and German, and enjoys her life in Shanghai.

"When I joined Lenze in 2003, it was merely a trading company in China, much smaller than today, "said the 43-year-old. She added that the company currently operates a production plant and 12 offices across China.

"In 2007, there were only a few companies nearby," she recalled. This is in stark contrast to the area's current large amount of companies, well developed and efficient infrastructure and a growing number of universities with a lot of qualified young talent.

After spending 17 years in Shanghai, Xia-Bramekamp said her impression of the city has remained rather unchanged. "Whenever I am in difficulty, people always love to offer help and be friendly. I feel really welcomed and I still feel welcomed and feel at home."

But there are some things that change. One is the time spent on visa applications. "It used to take at least two weeks. Now it only takes a couple of days," said Xia-Bramekamp.

Hang Yingwei, head of the Pudong New Area government, said the area has created a highway for working visa application procedures allowing foreigners to have their application materials halved and approval processing times cut from 12 working days to five days.