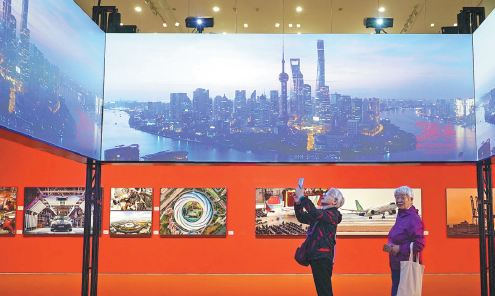 Visitors check out an art exhibition about the Pudong New Area's three decades of development in Shanghai on Oct 30. [Photo by GAO ERQIANG/CHINA DAILY]

The ever-improving business environment and numerous opening-up policies first experimented with in Shanghai's Pudong New Area over the past three decades have made the 1,210-square-kilometer area the benchmark for foreign investment in China.

In an article published in People's Daily in April, Shanghai Party secretary Li Qiang said Pudong has accumulated much experience in adopting many of the country's reform policies. The area should shoulder more responsibility to help China more deeply integrate into the world economy in the coming years and grow into a leading facilitator in China's efforts to drive economic globalization, Li said.

The financial sector is undoubtedly a highlight of Pudong's development over the past 30 years.

Yang Chao, deputy head of the area, said Shanghai has grown into one of the world's key financial hubs, given financial institutions and transactions registered in the area.

"It is no doubt that finance has become the pillar industry of Pudong. The iconic Lujiazui in central Pudong has grown into quite a dynamic financial center," said Mark Leung, China CEO of JPMorgan.

Apart from the large number of financial institutions and 300,000 financial professionals, the favorable policies rolled out by Pudong and the municipal government have helped with the prosperity of the financial sector, Leung said.

Multinational investment company Fidelity International stepped into China in 2004 by setting up its first office in Pudong. In 2017, it became the first wholly foreign-owned private equity firm in China and applied for mutual fund qualification with China's top financial regulator this May.

"Pudong will become the world's financial center in the future. It can be expected that all kinds of financial institutions, including bourses, will gather here. We can see from our own experience here the local government's dedication to improve the business environment," she said.

More than $5.9 billion in new foreign investment was made in Pudong's free trade zone from January to August, up 9.2 percent year-on-year. The value of total exports and imports topped 1.06 trillion yuan ($160 billion) during the first eight months, accounting for nearly half the city's total.

The municipal government last June released a guidance to facilitate Pudong's high quality development amid the deepened round of reform and opening-up, specifying that Pudong's GDP will top over 2 trillion yuan in seven years' time. A total of 20 detailed measures have been introduced, which include giving the Pudong local government more administrative say in economic management, administrative approval and policymaking.

Eddie Ng, managing director of JLL East China, said the local government's constant efforts to improve the business environment will further consolidate multinational companies' confidence to be more deeply rooted in Pudong. From a long term perspective, the accelerated opening-up in the financial sector and the development of technologies will support the development of all industries, which will be translated into more opportunities in Pudong, Ng said.

Global cosmetics giant L'Oreal Group, which officially tapped into the Chinese market by setting up its country headquarters in Shanghai in 1997, launched a research and innovation center in Pudong in 2005. Covering more than 20,000 square meters, it is the company's fourth R&D center after facilities in Paris, New York and Tokyo.

According to Fabrice Megarbane, president and CEO of L'Oreal China, the presence of L'Oreal in Pudong can be largely attributed to the company's confidence in Shanghai, which has grown into a hub for multinational companies' regional headquarters. To that end, Pudong will especially work as the front line of all reform and opening-up policies.

The filing certificate mechanism for imported cosmetics samples, which was adopted in March 2017, has largely facilitated the research and development of multinational companies in Pudong. The policy has also been referred to in other markets where L'Oreal operates, significantly influencing the Customs model for L'Oreal worldwide, Megarbane said.

"Many innovative policies are first attempted in Pudong. World-class innovative industries and top talent gather here. L'Oreal has benefited from the number of policies to improve the business environment here," he added.