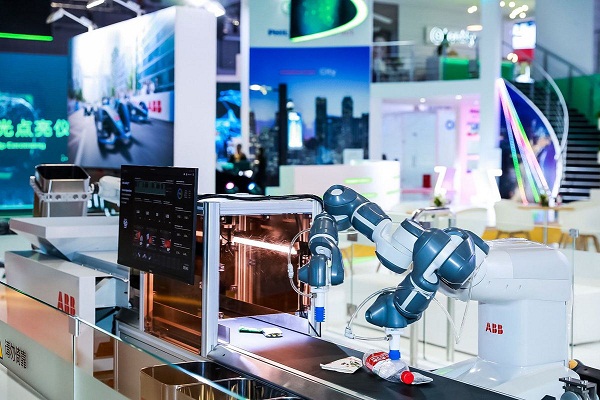 A demonstration of an ABB trash sorting robot demo. [Photo provided to chinadaily.com.cn]

The robotics manufacturing and research facility of ABB, which started construction in Shanghai in 2019, is expected to achieve an annual production capacity of 100,000 robots, a senior official of the Swiss industrial giant said on Nov 4.

With a total investment of 1 billion yuan ($148 million), the factory in Kangqiao, the Pudong New Area, is set to open by the end of 2021.

"It will be the most advanced, automated robotics factory across the world where robots make robots, utilizing the latest manufacturing processes including machine learning and digital solutions," Liang said.

He noted the choice of the facility's location - the Pudong New Area - is rooted in the company's anticipation for the Chinese market and the robotics industry.

"We are optimistic about the manufacturing industry and export market in China, and Shanghai, including Pudong, is a talent pool where the local government is supportive," Liang added.

Since it entered the local market in 1994, the company has cooperated with the Shanghai government in fields like energy, transportation and infrastructure, driving the city to build itself into a global science and innovation center.

"We are also exploring not merely ways to develop in areas, covering big data and 5G, but scenarios where robots will be deployed in the future, such as garbage sorting and medical services," he said.

According to the city's plan on smart factory development released in September, Shanghai aims to make 100 smart factories by 2022, in line with the highest international benchmarks. It will also work on lifting the production efficiency of smart factories by over 20 percent on average, while cutting operating costs by more than 20 percent.