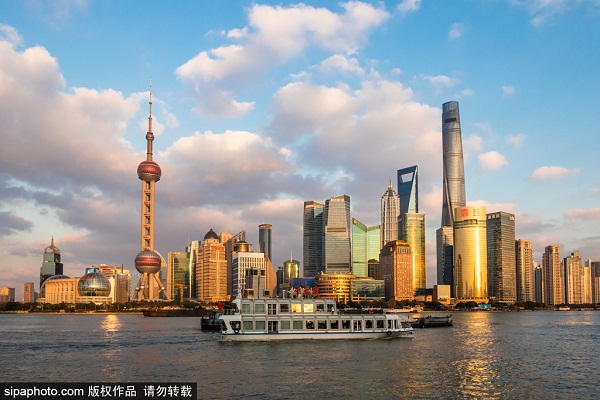 High-rise buildings and skyscrapers dominate the skyline of the Huangpu River and the Lujiazui Financial District in Pudong, Shanghai. [Photo/Sipa]

Though it covers just one-8,000th of the country's land, Shanghai's Pudong district produced one — 80th of the nation's gross domestic product (GDP) and one —15th of the total amount of imports and exports of goods, said a top official of the district.

With a string of piloting policies and measures, Pudong, which celebrates its 30th anniversary of development and opening-up this year, has become an important symbol of China's reform and opening-up, and the epitome of the municipality's modernization, said Weng Zuliang, Party chief of Pudong district, at a municipal news conference on Monday.

"Pudong will continue to function as a pioneer and role model for innovative development and participate in international collaborations and competitions as a representative of China," said Weng.

From January to August, the number of newly established enterprises in Pudong increased by 32.8 percent year-on-year, actual foreign investment increased by 4.7 percent, and the manufacturing output value of the strategic emerging industries rose by 21.5 percent, data from the district government showed.

Pudong has also been strengthening its functions in the global allocation of capital, information, technology, talent and goods.

The district has also been accelerating the development of the higher-level headquarters economy. To date, Pudong is home to 348 regional headquarters of multinational companies, Weng said. During the past year, Volvo Construction Equipment and Dassault Systemes moved their Asia Pacific headquarters from Singapore and Japan respectively to Pudong. Hema Fresh has also set up its global headquarters in Pudong.

The district government said that a system to help innovation and business incubation and development has been set up in Pudong. A total of 166 incubators that help startups in different phases have been established to reduce the cost of innovation and entrepreneurship for medium- and small-sized businesses.

For example, Pudong has become the region with the highest industrial concentration, highest level of comprehensive technology, and the most complete industrial chain regarding integrated circuits development in the country. The scale of the industry in the district exceeded 120 billion yuan ($17.6 billion) last year, accounting for 71.5 percent of Shanghai's total.

In terms of biomedicine, Pudong has produced 15 percent of new drugs and 10 percent of innovative medical equipment in China. The industrial scale of these products reached 77 billion yuan last year, accounting for 46 percent of the municipality's total.

Hang Yingwei, governor of Pudong district, said that one of the focuses of the district's work for the next phase is to design new policies and measures featuring greater openness for new industries, especially those regarding high-end services, in order to promote differentiated reforms.