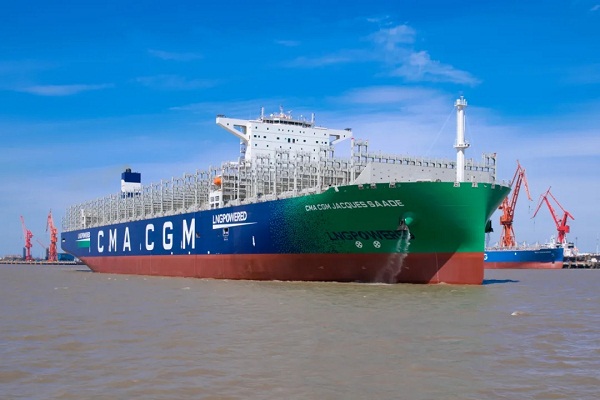 The ship was designed by the 708th Research Institute of China State Shipbuilding Corp (CSSC) and built by Pudong-based Hudong-Zhonghua Shipbuilding (Group) Co, a subsidiary of CSSC.

The ship, capable of carrying 23,000 twenty-foot equivalent units (TEU), is 399.9 meters long, 61.3 meters wide, and has a deck area of 23,978 square meters, equivalent to three and a half standard football fields. It is more than 60 meters longer than the world's largest aircraft carrier.

With a series of intelligent controlling systems, the ship requires only 26 crew members to operate and is capable of weathering winds of up to gale force 10.

The ship is equipped with an 18,600-cubic meter tank for liquefied natural gas, which allows it to travel more than 20,000 nautical miles, enough to make a round--trip voyage between Europe and East Asia.

It is the first ultra large container vessel to use a dual-fueled engine mainly powered by LNG. Compared to traditional ships, it will reduce carbon, nitrogen oxide and sulfur emissions by 20 percent, 85 percent and 99 percent, respectively.

The ship is the first of nine vessels the French company ordered from CSSC in September 2017. The remaining eight vessels will be built by two Shanghai-based shipyards operated by CSSC, Hudong-Zhonghua Shipbuilding (Group) Co and Jiangnan Shipyard (Group) Co.