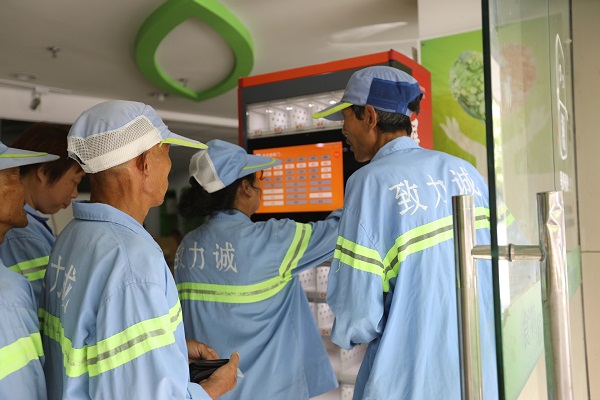 Sanitation workers pick up free food at the food bank distribution station in Shanghai's Tangqiao neighborhood on Tuesday. [photo by He Qi/chinadaily.com.cn]

From 8 to 10 each morning, dozens of low-income families and sanitation workers in the Tangqiao neighborhood in Shanghai's Pudong New Area would line up in front of a food bank to collect free vegetables and fruits.

The establishment, created by Shanghai Oasis Ecological Conservation and Communication Center in 2014, is the first of its kind established in the country.

The bank collects donated products-usually food items close to their "best before" dates from supermarkets and producers or excess from restaurants - before redistributing them to the needy who live in the vicinity.

According to the Oasis, the establishment of such food banks is aimed not only at salvaging food that otherwise would be wasted, but also at protecting the environment and helping low-income individuals and families.

While the concept has been gaining traction across China in recent years, it was not until recently when the country started a nationwide campaign to avoid unnecessary food wastage that such banks have become better known.

Oasis said that 580 tons of food worth more than 31 million yuan ($4.5 million) had been salvaged by the end of 2019. The food, which was produced by 202 food enterprises, was distributed to 760,000 individuals at nearly 250 nonprofit organizations, communities and schools.