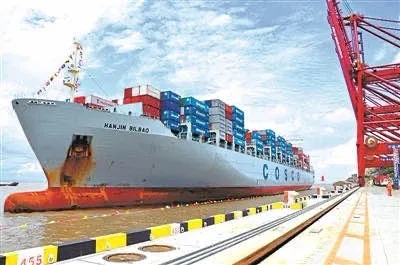 A container ship berths at a port in Pudong, Shanghai. [Photo/WeChat account: gh_01c6f7b4cf3d]

The index, jointly published on July 11 by Xinhua News Agency and the London-based Baltic Exchange, evaluates the ports, services, and environment of each shipping center and tracks dozens of major ports across the globe.

This is the first time Shanghai has made the top three in the ranking, and it can be attributed to the growing service capacity of Pudong New Area, according to local authorities.

According to the area's shipping service department, Pudong is currently home to nearly 8,000 shipping companies, including 1,300 foreign-funded businesses.

In addition, several ship management and service giants, including Columbia Shipmanagement and V-SHIP, have set up operations in Pudong. Six of the global top 20 containers companies are now operating here.

Lujiazui area's role as an international financial center has also contributed to the intensive development of a high-end shipping industry with an upgraded financial service system.

The area has been working to concentrate resources such as capital, talent, information, and technology by strengthening cooperation between shipping and financial institutions and holding industrial fairs in an effort to create an international, market-oriented, and professional development environment for Shanghai's shipping industry.