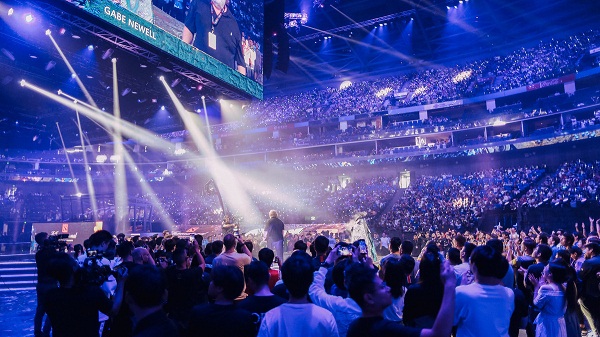 A total of 16 teams from across the world are competing for the 2019 International DOTA2 Championships in Shanghai's Mercedes-Benz Arena on Aug 20. [Photo provided to chinadaily.com.cn]

A national research institute for the game industry recently established in Pudong New Area, Shanghai is expected to inject new momentum into the e-sports sector in the area.

Founded by the China Audio-video and Digital Publishing Association and the Shanghai government, the institute will focus on the study of industrial development trends and formulating industrial standards, serving as a "lookout tower" for the sector, experts said.

According to Tang Jinsong, head of Pudong's publicity department, the professionalization of e-sports in the area can be traced back to 1999, when Shanda Group, a domestic gaming industry leader, was established there.

As Shanghai offers fiscal, venue and talent support to build itself into a global e-sports center, Pudong is undertaking the mission of serving as the center's core functional area.

To date, Pudong has hosted more than 70 percent of international and domestic first-class e-sports finals and attracted a number of leading companies, such as Tencent, NetEase and Perfect World, to operate in the area.

Several international-level e-sports venues, including the Mercedes-Benz Arena and Shanghai Oriental Sports Center, have also been built and have become first choices for major e-sports events both from home and abroad.