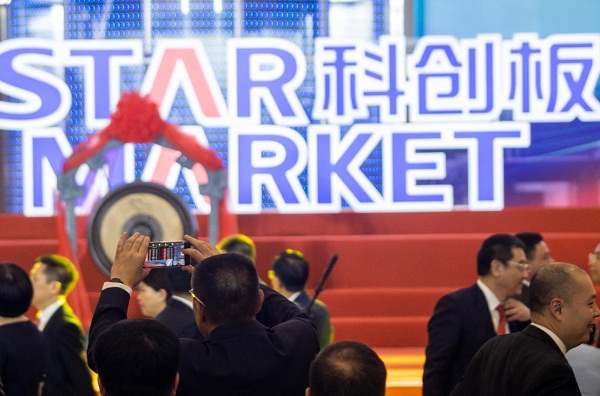 An attendee takes a snapshot at the launch ceremony of the STAR Market in Shanghai. [Photo by Wu Jun/For China Daily]

Pudong chip makers Cambricon, Galaxycore and Veri Silicon are slated to be listed on the Shanghai Stock Exchange's sci-tech innovation board, also known as the STAR Market, according to the sci-tech and economy commission of Pudong New Area in Shanghai.

Prior to this, local chip design companies such as Espressif Systems, Amlogic and Giantec Semiconductor were already listed on the STAR Market.

Veri Silicon has been introducing a new type of chip almost every week, while products co-developed by Galaxycore and its partner have been widely used by renowned global brands such as Samsung, Xiaomi, OPPO, Nokia, TCL and 360.

Meanwhile, a number of smaller companies have been expanding their global reach. For example, Espressif Systems, one of the first chip makers to be listed on the STAR Market, has a 30 percent share of the global WiFi MCU market, while the EEPROM product line by Giantec Semiconductor is ranked third among suppliers worldwide.

Industrial insiders have pointed out that chip makers in Pudong enjoy bright prospects because of the development of 5G, internet of things and artificial intelligence. The STAR Market has also been a catalyst for technological innovation.