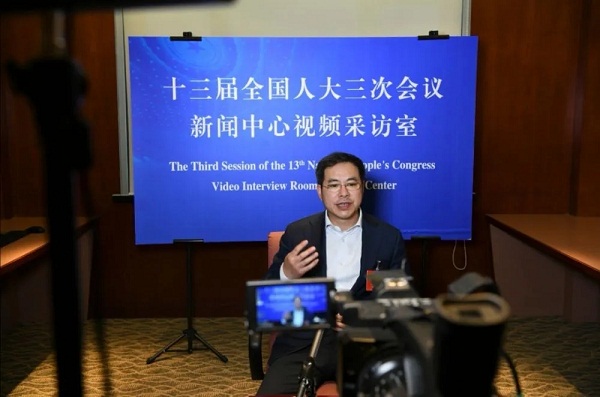 Hang Yingwei, a deputy to the National People's Congress (NPC) and chief of the Pudong New Area in Shanghai, describes Pudong's efforts to improve urban management in an interview on May 25. [Photo/WeChat account: pdnews]

Hang Yingwei, deputy to the National People's Congress (NPC) and chief of the Pudong New Area in Shanghai, suggested that more support should be provided to Pudong in rule of law, giving full play to its role as a national example.

This year marks the 30th anniversary of the development and opening-up of Pudong. Over the past three decades, the district has made great strides in terms of both economy and governance.

"In Pudong, a single network system is capable of managing numerous issues, such as the management and distribution of shared bicycles, regulation of muck trucks, and the overhaul of group-oriented leasing," said Hang in an interview on May 25.

As early as 2017, the district had introduced a "city brain"- a smart city platform aiming to improve urban management through the use of big data, cloud computing and artificial intelligence, among other cutting-edge technologies.

A new function serving college graduates was developed recently to cope with the novel coronavirus outbreak. The platform matches some 193,000 fresh graduates with more than 20,000 job opportunities, reducing the outbreak's impact on this year's employment.