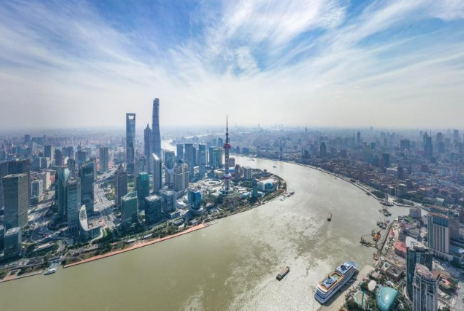 Pudong New Area in East China's Shanghai holds a "cloud signing" ceremony for 18 regional headquarters of multinational companies which will be established in the area. [Photo/cri.cn]

At the signing ceremony, the government of Pudong signed cooperative agreements with global industry leaders including Brookfield Renewable Holdings and France's Novares, all of which agreed to accelerate the development of emerging industries in Pudong.

Despite the global COVID-19 epidemic, MNCs remain optimistic about Pudong and expressed faith in the area's improved business climate and favorable policies.

Holly Lei, president of the Chinese unit of German chemicals giant Covestro, said that the company is planning to upgrade its regional headquarters in Pudong to accommodate research and development (R&D) and accounting, among other new areas of focus for the company.

"The upgraded regional headquarters in Pudong will better serve the Chinese and Asia-Pacific market, and will push forward our 'in China, for the world' innovation strategy," Lei added.

Additionally, the Pudong government announced 16 measures to promote the development of the regional MNC headquarters in the area, including offering financial support to MNCs setting up regional headquarters and opening up green channels for skilled workers that want to apply for a Shanghai hukou (household registration status).

Since the COVID-19 outbreak, Pudong has stepped up epidemic prevention and control efforts and worked to restore the local economy.