Disney to open Shanghai Disneyland on May 11 ​ 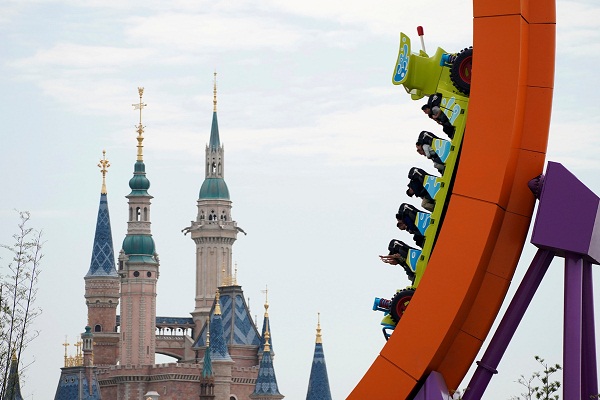 Disney plans to reopen its Shanghai theme park Monday under a series of health and safety procedures as it prepares to enter the first phase of recovery from the coronavirus pandemic, its executives announced Tuesday.

"We are seeing encouraging signs of a gradual return to some semblance of normalcy in China, and in light of the lifting of certain restrictions in recent weeks, and the successful re-opening of our park's adjacent retail and food and beverage areas, Disneytown, we and our government partners Shanghai Shendi Group, plan to open Shanghai Disneyland on May 11," said the company's newly appointed CEO Bob Chapek during its fiscal second-quarter earnings call.

Chapek said Disney plans to implement "a phased control" as it reopens its Shanghai facility, with attendance limits, an advanced reservation and entry system, and social distancing to control density of the crowds.

It will follow strict government-required health and prevention procedures, which included the use of masks (for both employees and visitors), temperature screening, and contact tracing and early detection systems. The only people in the park who will not wear masks will be the characters, but they will be at a distance from crowds, Chapek added.

The Shanghai and Hong Kong Disneylands, both closed in January, became the first among Disney's worldwide theme parks to suspend operations after the coronavirus struck China. The closure Tokyo Disneyland's soon followed in February. In mid-March, Disneyland Paris and Disney's theme parks in the US were shuttered indefinitely.

The Shanghai facility usually sees around 80,000 visitors per day, Chapek said, but the government has required that it receive no more than 30 percent of its regular capacity, or around 24,000 visitors. It will reopen with a visitor capacity well below that, before ramping up to reach the 24,000-daily standard.

It's unclear at this point when the rest of Disney's theme parks around the world will resume operations.

"As we look ahead, while we announced plans to reopen Shanghai Disney Resort, there is limited visibility into the timing of reopening and the conditions under which we can reopen the rest of our parks and resorts, cruise ships, and Disney stores," said Disney Chief Financial Officer Christine McCarthy during the call.

Prior to the disruption caused by the COVID-19 pandemic, all of Disney's parks, with the exception of Hong Kong Disneyland, which was suffering from a drop in visitors from the Chinese mainland and other parts of Asia, were performing exceptionally better than the prior year, said McCarthy.

In total, Disney estimated that the COVID-19 impact on its current quarterly income from continuing operations before income taxes across all of its businesses was as much as $1.4 billion.

Executives said the company began a furlough for around 100,000 employees on April 19. Unlike layoffs, the process allows affected employees to remain as Disney workers and continue to receive full health benefits paid for by the company.

Senior executives' compensation companywide was also reduced considerably, Chapek said. It will remain in place until the company sees a substantive economic recovery.

Despite declines in its parks and cruise-ship businesses, Disney is seeing some positive developments in its media network, direct-to-consumer, and broadcasting businesses. Disney's Hulu, for example, had 32.1 million subscribers by March 28, up 27 percent from a year ago.

Chapek said the company has no projection on when it will resume large-scale film operations, but it will do so when it could "absolutely guarantee" the safety of its filmmakers and employees.

"I have absolute confidence in our ability to get through this challenging period and recover successfully," said Bob Iger, Disney's executive chairman, who stepped down as Disney CEO in February.