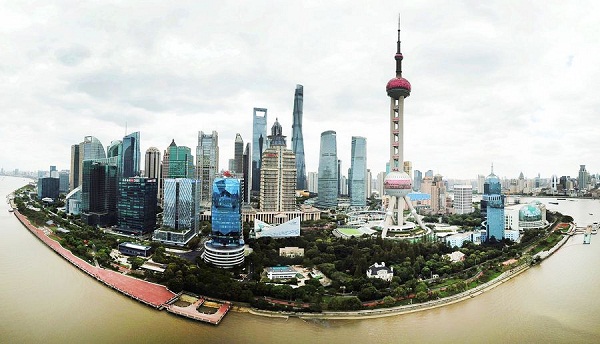 Aerial photo taken on Oct 15, 2019 shows a view of the Lujiazui area in Shanghai. [Photo/Xinhua]

The Shanghai Municipal Financial Regulatory Bureau said a total of eight licensed foreign financial institutions established a presence in the Lujiazui financial hub of Shanghai's Pudong New Area in the first quarter. Another three leading global asset management firms settled down there in the same period.

Following these arrivals, the world's top 10 asset management companies have all launched operations in Shanghai. Among the 25 wholly-owned foreign private equity firms registered with the Asset Management Association of China, 24 have set up offices in Shanghai. Foreign banks account for more than 10 percent of the banking industry's total asset volume in Shanghai.

Major players are among their ranks. JPMorgan Securities (China) Co Ltd, a joint venture in which the New York-based commercial and investment bank holds a controlling stake, officially commenced business in Shanghai on March 20. Shanghai Tower, the world's second tallest building and a landmark in Lujiazui, will be the venue for the newly unveiled securities firm.

"More than 860 licensed financial institutions－including banks, securities brokerages, insurers and futures companies as well as another 5,000 emerging financial services providers－have congregated in Lujiazui, providing work opportunities for 300,000 financial-sector professionals. The financial infrastructure, sufficient talent supply as well as an innovative and vibrant business environment will bring opportunities for us and our clients," said Mark Leung, CEO of JPMorgan China.

The financial giant's confidence in Shanghai is expressed by the Global Financial Centres Index, which was jointly released by Shenzhen-based China Development Institute and UK-based independent think tank Z/Yen Partners in late March. In the latest version, Shanghai occupied fourth place for the first time this year, up from fifth last year.

Leon Li, Shanghai branch manager of HSBC China, is not at all surprised to see Shanghai's improved ranking. Joining the bank as a management trainee in 2000, Li not only witnessed the burgeoning of skyscrapers in Lujiazui, but more importantly, the opening-up and maturity of the financial sector.

"We are amazed by the intensity of financial institutions and the active financial market here in Lujiazui, which can be compared to London and New York," Li said.

HSBC's business has thus grown accordingly. While it was one of the first foreign banks allowed to carry out renminbi business in Pudong New Area in 1996, the bank selected Pudong as its Chinese mainland business headquarters in 2000.

As the country's financial sector further opens up, HSBC has become one of the first foreign banks to join Shanghai Gold Exchange International Board in September 2014. In July 2017, it became one of the first market makers for the bond connect mechanism linking the Chinese mainland and Hong Kong markets.

"Multinational companies with businesses in China were our major clients in the early days. But over time, we have been supporting more outbound Chinese companies, especially those involved in the country's Belt and Road Initiative. It can be said that the progress of our business here is a snapshot of the rapid development of Pudong and the consolidation of Shanghai's role as a global financial center," said Li.