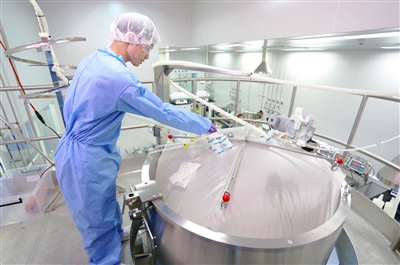 Multinational corporations in Pudong New Area have been stepping up investment and R&D in the area despite the outbreak of COVID-19, demonstrating confidence in the local economy.

German pharmaceutical company Boehringer-Ingelheim has two plants in Zhangjiang Science City, one of which resumed operations on Jan 31.

The company plans to invest 174 million euros ($187.43 million) in China from 2019 to 2023. It also plans to cooperate with Chinese scientific research institutes to develop drugs for COVID-19, according to Gao Qifei, president of Boehringer-Ingelheim China.

On March 12, the China International Import Expo Bureau announced the first group of participating companies, including Honeywell, a high-tech company based in the United States. The company showcased its JetWave satellite communications system in last year's CIIE in Shanghai. A Boeing 757 jet equipped with the system has now finished ground and flight tests in China.

"The COVID-19 epidemic had made us realize the influence digital technology can have on society. Smart manufacturing is helping Chinese industrial companies resume operations, including our plants in China," said Zhang Yufeng, president of Honeywell China.

Roche, a pharmaceutical company based in Switzerland, also has a plant in Zhangjiang Science City that produced drugs for the treatment of COVID-19 patients in the early stages of the epidemic.

The company also cooperated with partners to launch a public welfare program to provide medical news and information for cancer patients in 350 cities amid the epidemic.

In addition, the Novartis Shanghai Park resumed operations on Feb 10. Novartis is one of the world's top three pharmaceutical companies, and it has cooperated with three e-commerce platforms to sell more than 20 drugs online.