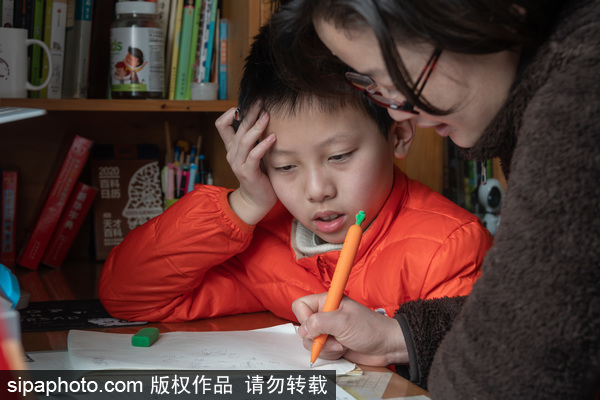 An elementary school student does his homework as schools have been suspended amid the novel coronavirus outbreak in Shanghai on March 3, 2020. [Photo/sipaphoto.com]

The Shanghai education authority has banned interviews of students as part of the enrollment process in the city's private schools of compulsory education, the Shanghai Municipal Education Commission announced on Wednesday.

Enrollment in private schools in the city will be synchronized with that of the public schools and student admission will be decided by lottery if the number of applicants to a private school exceeds its enrollment plan, the commission said in a public release.

The ban is in accordance with a new regulation issued by the Ministry of Education last year to ensure fair enrollment at all schools, the commission said.

As parents always hope for the best education for their children, competition for private school entry has become ever-fiercer in recent years, when admission rates could drop to one in 20 students in some schools in Shanghai. To get a better chance of admission, many parents sent their children to cram schools at ages as young as 3.

As part of the measures to ease public anxiety on education, the Ministry of Education issued the regulation to ban selective enrollment of compulsory education across the country last year.

The Shanghai Municipal Education Commission started to rein in control over enrollment of private schools in 2017, when private schools were no longer allowed to enroll students ahead of public schools. But interviews were still allowed.

In accordance with the ministry's new regulation, this year the Shanghai education commission stipulates that no private schools are allowed to organize formal tests and interviews for enrollment. There also will not be any preferential enrollment policies for students with certain talents.

The commission also notes that education administrative departments in each district should ensure eligible school-age children receive compulsory education by following the principle of enrolling in nearby schools without examination.

Due to the ongoing COVID-19 epidemic, all public schools of compulsory education and partial private schools across the city are asked to run their open the school day online for at least seven days starting on March 21, the commission said.