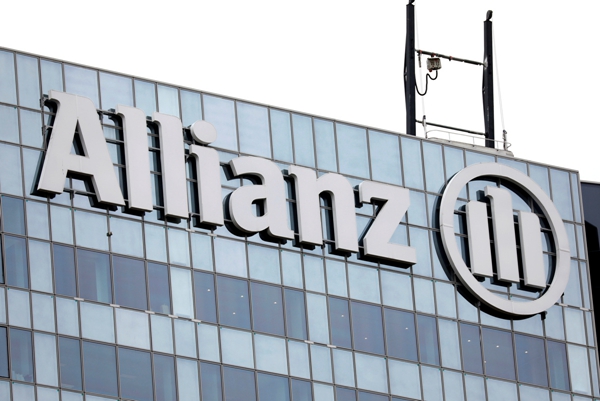 The logo of insurer Allianz SE is seen on the company building in Puteaux at the financial and business district of La Defense near Paris, outside Paris, France, May 14, 2018. [Photo/Agencies]

The opening-up in the Chinese financial industry entered a new phase, with the first wholly-owned foreign insurance holding company, Allianz (China) Insurance Holding, being unveiled in Shanghai on Thursday.

The Germany-based company received official approval in mid-November from the China Banking and Insurance Regulatory Commission (CBIRC) to commence operations of its insurance holding company in Shanghai.

Sergio Balbinot, chairman of Allianz (China) Insurance Holding, explained that the large population, the rise of the middle-income group and the low penetration rate of commercial insurance all point to large room for growth in the country.

Oliver Bate, chief executive officer of Allianz SE, said that up to 30 percent of the newly generated premium in the world will be coming from China in the next 10 years.

Having a presence in the Chinese market is crucial to the sustainable growth of Allianz, and this will now be made possible by China's steady opening-up of its capital market, he said.

While the detailed agenda of the new insurance company could not be released at this time, Bate said that they would like to bring their expertise in protection, risk management and reinsurance into the Chinese market. The number of changes that the Chinese government is enacting in areas such as health insurance, pension and annuities is on Allianz's radar, he said.

Allianz's know-how in asset management has been stressed by Bate when it comes to the German insurer's outlook on the Chinese insurance market.

As China's economic growth is more consumer-led and now has more risk exposure to the outside world, Chinese individuals would need to invest more strategically outside of the country and diversify their investments, he said.

On the other hand, investing in China has been highly lucrative over the past three decades given the large number of market opportunities and the constantly strengthening renminbi, Bate explained.

China has accelerated its opening-up in the insurance sector with 34 detailed policies introduced in April 2018. Those policies relaxed rules on foreign ownership, insurance intermediaries and asset management.

The CBIRC said the limit on foreign ownership of life insurance companies has been completely lifted on the first day of this year.

Industry giant AIA will likely be the first wholly-owned foreign life insurance company in the country, according to public information released on Jan 9. Prior to that, three asset management companies of foreign insurers began operations last year.

A survey from UBS showed that the presence of foreign insurers in China is still at a very early stage when compared to other Asian markets.

Kelvin Chu, an analyst for Asian insurance and diversified financials at UBS Securities, said that one or two foreign insurers are able to compete with local insurance companies in the first-tier Chinese cities, accounting for 3 to 6 percent of the local market share.

"Although China is the world's second largest life insurance market, taking up 15 percent of the world's annual premium, the market saturation and insurers' penetration still remain at a low level. It is for sure that China will need an ample supply of commercial insurance to cater to the rising need of consumers," said Chu.