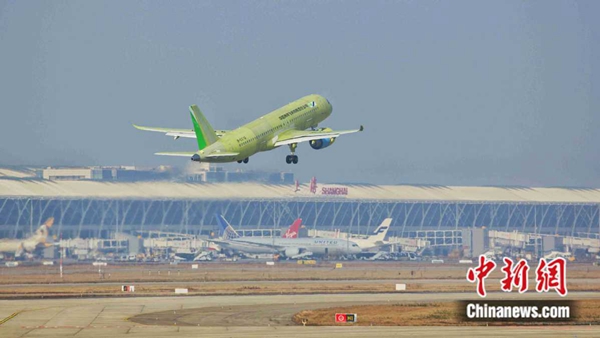 The sixth and final C919 test aircraft made by COMAC takes off at 10:15 am on Dec 27 from Shanghai Pudong International Airport. [Photo/Chinanews.com]

The Commercial Aircraft Corp of China (COMAC) is expected to give a major boost to the aviation industry in Shanghai by cooperating with the local government on a number of aviation projects.

Shanghai will accelerate the development of the aviation industry by focusing on design, R&D, assembly, production and operation, and strive to achieve a total industrial output value of 300 billion yuan (&43.19 billion) by 2035.

A number of enterprises and industrial incubation projects were introduced to the park and the valley at the launch ceremony.

Zhuqiao Aviation Industrial Park is expected to develop into a large aircraft industry cluster which will reduce production costs and form a convenient supply chain.

COMAC Innovation Valley aims to turn itself into a hub for air science, research and intellectual property in the aviation field.

So far, all of the C919's static tests have been completed, and manufacturing has begun on the first batch of aircraft set to be delivered to customers, according to COMAC.

In addition, on Dec 28, COMAC delivered its 22nd ARJ21 aircraft. To date, the ARJ21 fleet has accumulated more than 23,000 hours of flight time and safely carried more than 660,000 passengers.