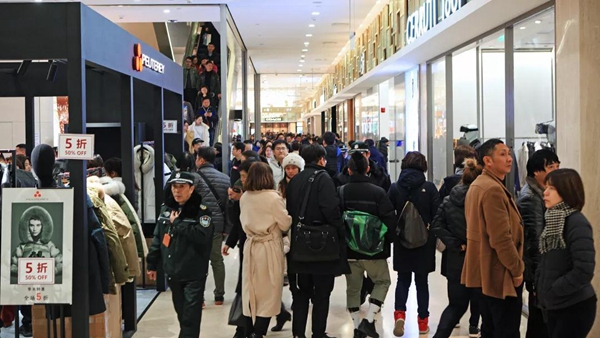 Once again, Yaohan broke its own record, recording the highest single-day sales by any department store in China.

Yaohan's annual year-end marketing campaign, launched in 2004, has long been a crucial player in the mall's success. It is estimated that sales during the event account for nearly one fifth of the mall's total annual sales.

Substantial discounts during the event have led to many loyal customers for Yaohan. Customers can use 300-yuan coupons to pay for products at any store in the shopping mall, which make expensive products such as gold, home appliances and mobile phones extremely popular.

Although this year's event fell on a working day, shoppers were not deterred.

On the morning of Dec 31, before Yaohan even opened its doors, many customers had already lined up to receive reservation vouchers for hot commodities. For security reasons, Yaohan opened one hour in advance (it was originally scheduled to open at 8 am).

Customers came pouring in at around 10 am, quickly filling the parking lot, even though Yaohan employees were told not to use the lot that day.

The number of shoppers continued to grow throughout the day, as the mall bustled with New Year spirit. Even at midnight, people continued to come, hoping to snag a few of their favorite products before closing time at 2 am. Ten minutes before closing, many still weren't ready to leave.

Yaohan provided services such as free drinking water, charging devices, and express delivery for the convenience of shoppers.