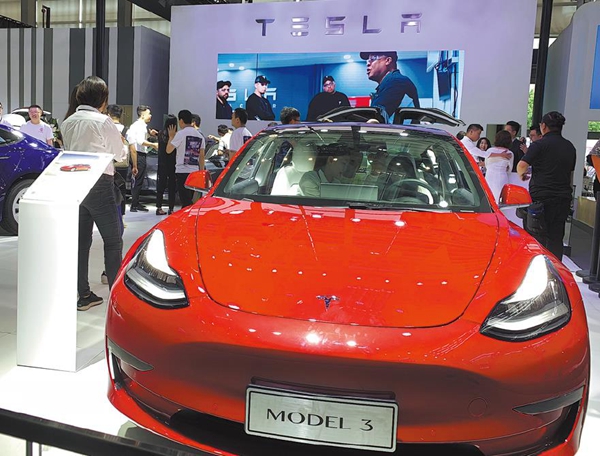 US electric carmaker Tesla Inc's gigafactory in Shanghai delivered the first 15 made-in-China Model 3 sedans to its employees on Dec 31.

Mass production of Tesla vehicles in the near future is expected to facilitate the factory's entry into the world's largest new energy vehicle market.

One of the employees said that it is a pleasure to be a part in producing the Tesla Model 3 vehicles as the era of new energy approaches.

Allen Wang, general manager of Tesla China, said that the company will start delivering made-in-China Tesla vehicles to customers on a large scale in January.

Tesla has been bullish about the Chinese market. In its financial report, Tesla believes that China could become the biggest market for the Model 3.

Located in Lin-gang Special Area of the China (Shanghai) Free Trade Zone, Tesla's Shanghai factory is China's first wholly foreign-owned car plant. It has a designed annual capacity of 500,000 electric cars with many robots and automatic production lines to ensure efficiency and quality.

The factory spent less than a year from breaking ground in January 2019 to delivering vehicles thanks to Shanghai's efforts to improve its business environment for foreign investors. Tesla CEO Elon Musk once hailed it as "amazing Shanghai speed."