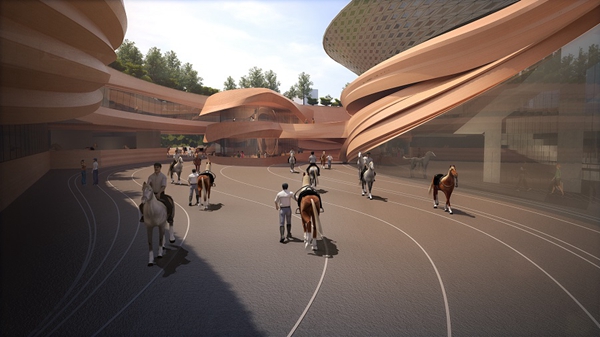 A rendering of the Shanghai Juss International Equestrian Center [Photo/chinadaily.com.cn]

The venue, located in the Expo Cultural Park of Pudong New Area, Shanghai, is expected to be completed by April 2022.

It will cover an area of 3.32 hectares and include 5,000 seats and VIP stands, a competition area, a warm-up area, a training center, stables, and other facilities.

Designers of the equestrian center, which include international teams and industry experts, will create the world's first group-controlled liftable lighting platform to meet the broadcasting and lighting needs of equestrian events held at varying times and in varying weather conditions.

Shanghai hosts several top international equestrian events and is home to an increasing number of equestrian clubs and athletes, which is what led to the decision to build a new equestrian center.