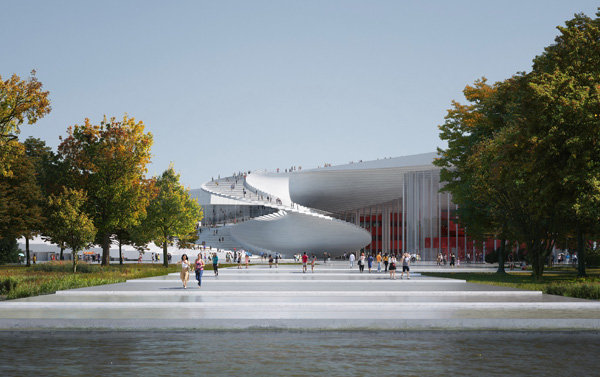 A rendering of the Shanghai Grand Opera House [Photo provided to chinadaily.com.cn]

A groundbreaking ceremony for the Shanghai Grand Opera House was held on Dec 18.

The opera house, located near the site of the 2010 World Expo in Pudong New Area, will cover an area of 146,338 square meters.

It is set to be completed within five years and will feature rehearsal and opera writing rooms, spaces for art education, and three performance halls with 2,000 seats, 1,200 seats and 1,000 seats respectively.

The opera house will be able to hold 650 performances and receive up to 650,000 visitors in the first year after its opening.

Lin Hongming, head of the preparation group for operating the opera house, said that visitors will have the chance to watch national operas, joint productions by domestic and foreign opera houses, and works from international theaters.

Chen Ping, former director of the National Center for Performing Arts in Beijing, said that the opera house will not only serve as a performance venue, but will also make efforts in opera creation, production, education, demonstration, and research.

The Shanghai Conservatory of Music launched the new Shangyin Opera House in September. Liao Changyong, principal of the conservatory, expressed hope that the two houses will collaborate in the future to promote opera and help develop the arts.