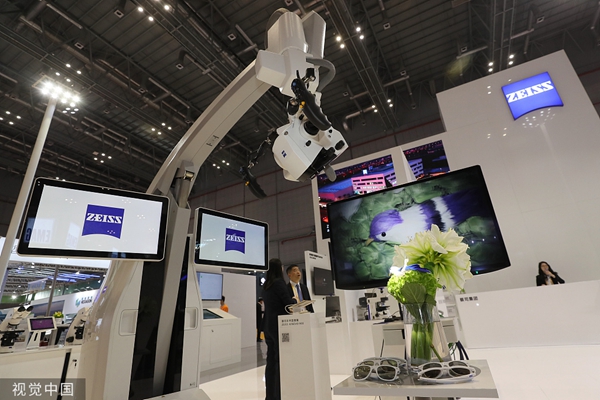 A robot operates a microscope at Zeiss' booth on Nov 5 during the second China International Import Expo in Shanghai. [Photo/VCG]

The upgraded version of the center, unveiled on Nov 11, expanded from an area of 738 to 993 square meters and added a dozen new products developed by Zeiss.

Maximilian Foerst, president of the Zeiss China headquarters, said the new center is part of efforts by Zeiss to satisfy its long-term commitment to bringing more high-quality products to the China market.

"Zeiss is confident in China's future market and will continue to develop innovative technologies in Pudong. I'm sure that China will become Zeiss' largest market."

The Zeiss China headquarters, established in Pudong in 2015, boasts Zeiss' first R&D innovation center outside Germany and is a hub for sales, services, training, and production. Its logistics and storage center is able to meet the needs of markets across China.

Through years of development, Zeiss has witnessed China become its second largest market. During the latest fiscal year, it earned 6.9 billion yuan ($980.87 million) in total revenue in the country, a year-on-year increase of 20 percent.

During the China International Import Expo in Shanghai this year, the Zeiss China headquarters signed agreements to sell 460 million yuan in products, over half of which were medical products.

Liu Chun, manager of clinical applications of the medical department of the Zeiss China headquarters, said that the company's innovative technology has been applied in major hospitals throughout China. For example, its unique laser technology has been used in more than 1.2 million treatments in the country.