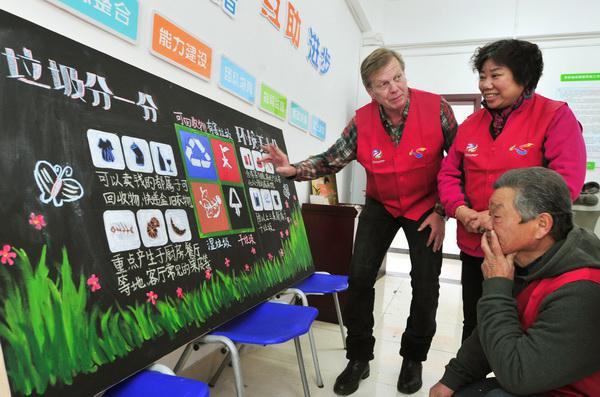 The Huhndorf Volunteer Station named after Ralph Juergen Huhndorf, a resident in a local community from Germany, was inaugurated in Zhoupu town, Pudong on International Volunteer Day on Dec 5.

Huhndorf is famous for his volunteering services at the community he lived in. He regarded the community as his home and received recognition from local residents.

The new volunteer station establisheded by the local government is aimed at encouraging more residents to participate in volunteering services.

Huhndorf has been cleaning paths and pruning green plants in the community during his leisure time every day since 2017. He also bought small saplings to plant on deserted green belts.

"At the beginning, local residents didn't understand Huhndorf because they thought he was just putting on a show," said Yu Pinghua, Party Secretary of the community. "But later they began admiring Huhndorf's perseverance and started helping him clean the community."

Now residents say Huhndorf is a "foreign Lei Feng". Lei was recognized as a Chinese volunteer who was characterized as a selfless and modest person.

"We all like a clean and tidy environment. If we clean our living environment every day, we will live comfortably, which will make us feel good," Huhndorf said.

"Even foreigners volunteer. Why not take care of our community?" Volunteer Wang said that the community environment is now better, largely due to the selfless dedication of Hendorfer. "His spirit was infectious. We, the residents, are becoming more conscious."

To spread Huhndorf's volunteering spirit, the Huhndorf Volunteer Station will gather volunteers and residents regularly to talk with Huhndorf. Huhndorf also said that he will cooperate with local residents to provide better volunteer services.