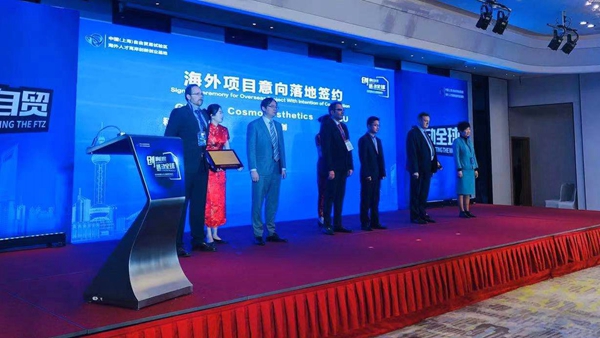 A signing ceremony for overseas projects is held at a matchmaking meeting in Pudong New Area on Nov 11. [Photo/pudongtv.cn]

The China (Shanghai) Pilot Free Trade Zone (FTZ) held its annual matchmaking meeting on Nov 11 in an effort to bring in more projects from overseas.

Representatives of overseas projects will have the chance to cooperate with incubators and investment institutions participating in the four-day meeting.

The event attracted 680 projects from around the world, and after being evaluated, 55 high-quality projects were selected to be carried out in the zone.

The Shanghai FTZ is striving to improve its biomedicine industry in terms of technological research, innovative products, and commercial applications, which affected which projects were selected to be carried out in the zone, according to the organizers.

Letters of intent were signed for three projects during the meeting. A representative of one of the projects, CosmoAesthetics, a company which focuses on finding ways to reduce side effects of cosmetics, said they now have a better understanding of China's market and business environment.

The representative also thanked the local government for giving them an opportunity to connect with major enterprises and for providing strong policy support for overseas projects.

Zhai Jingbo, general manager of HiMed, an incubator that signed a deal with CosmoAesthetics, said the incubator is experienced in dealing with projects related to medical treatment and biomedicine technology and will work to improve its services by utilizing an offshore base.

Tang Shiqing, director of the Pudong New Area's committee on science, technology and economics, said he hoped participants of the meeting would make full use of the platform to commercialize advanced technological achievements..

Attendees of the meeting discussed the latest developments in the biomedicine industry and topics related to investment in innovative drugs and training high-caliber medical personnel.