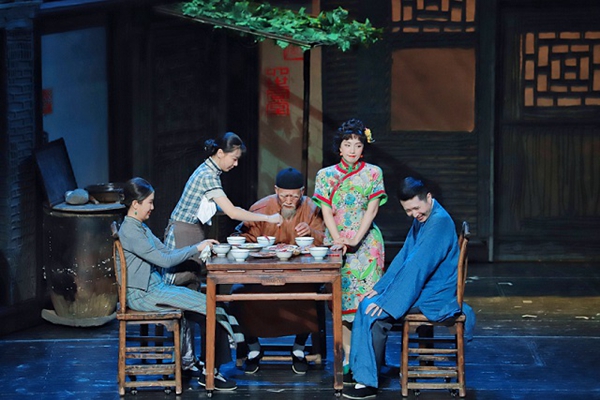 The Chinese play Four Generations Under One Roof  is held during the 2019 Pudong Culture and Art Festival in Pudong New area. [Photo/people.com.cn]

The two-month 2019 Pudong Culture and Art Festival, which featured a variety of high-quality shows, ended on Nov 4.

During the festival, more than 600 cultural activities were held across Pudong New Area.

Up to 200 professional art troupes from all over the world and more than 6,000 groups of amateur performers performed during the event.

The festival, which has been held in Pudong New Area for nine years, put on a number of popular shows in China and around the world this year, including music dramas, Chinese operas, dance dramas, and plays.

Audiences in Pudong New Area got the chance to appreciate a variety of cultures and art forms during the festival.

This year, the Shanghai Arts Centre served as the main venue for marketing and ticket-selling, while shows were held at other art centers and theaters across Pudong New Area.

People with a resident ID, household registration, or work certificate can buy tickets for just 20 yuan ($2.86) or 80 yuan.