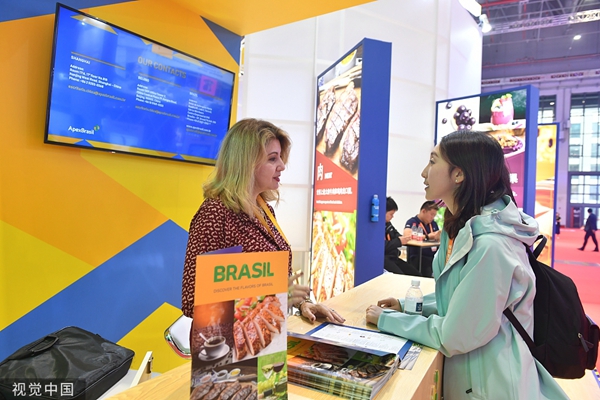 A visitor talks with an exhibitor at the second China International Import Expo, which is being held from Nov 5 to 10 in Shanghai. [Photo/VCG]

The second China International Import Expo (CIIE) kicked off in Shanghai on Nov 5 and will run until Nov 10.

Once again, China has demonstrated its commitment to opening its door by holding the world's first national-level import expo.

The event attracted more than 3,000 enterprises from more than 150 countries and regions, who displayed their products at the fair.

To better serve the needs of exhibitors, the average exhibition area for each enterprise was expanded from 74 square meters last year to 90 square meters this year.

The number of enterprises from the United States increased by 18 percent to 192, making it the country with the most participating enterprises. Assistant Minister of Commerce Ren Hongbin said the increasing number of participants shows the attractiveness of China's market around the world.

The main highlights of the expo are the new products and advanced technology debuting there. The expo is believed to be a great promotional platform due to the international attention it receives.

Products such as automobiles, medical equipment, robots, and agricultural commodities will be on display as well.

In addition to an exhibition area for enterprises, various national pavilions have also been set up to showcase the investment environments, cultures, and tourism industries of participating countries.

During the expo, a series of forums attended by government officials, businessmen, and scholars will be held to discuss major global economic issues.

A total of $57.83 billion in deals were signed at the first CIIE and the second CIIE is expected to exceed this amount.