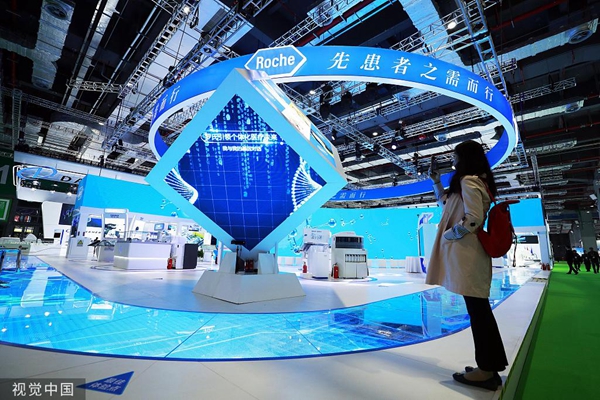 Swiss multinational healthcare company Roche Group exhibits a machine shaped like a Rubik's cube, which is capable of displaying a person's genes in visual form, at the second CIIE. [Photo/VCG]

Foreign firms participating in the second China International Import Expo (CIIE) lauded the business environment of Pudong New Area while attending a meeting held by the district government on Nov 5.

Andrews Hoffmann, deputy chairman of Swiss multinational healthcare company Roche Group, said that Pudong is the most attractive place in China for investors, talent, and innovators. He also said that Roche is honored to take part in Pudong's reform and opening-up.

"Due to our high confidence in Pudong, Shanghai, and China, we have a strong desire to bring more advanced medical ideas and innovative drugs to China's market through the CIIE," said Hoffmann.

Hoffmann recognized the CIIE as an important promotional platform and said that Roche's latest drugs for treating breast cancer and tumors, as well as its latest diagnostic tech products, are currently on display at the expo.

Ma Ruisi, a manager at American multinational consumer goods company P&G, said that P&G established a sales corporation in Pudong in 2011 to integrate its sales businesses in China due to Shanghai's status as a leader in fashion and consumption.

This year, P&G occupied an exhibition area of 450 square meters at the CIIE. Its new products include beauty devices, shavers, and cosmetics.

Christian Walti, CEO of precision machine tool manufacturer Starrag Group, said that the company has had roots in the land of vitality and innovation since it set up its China headquarters in Pudong in 1998.

Walti revealed that a new technology center in cooperation with Shanghai Jiao Tong University will begin operating on Nov 6.

Walti said that Starrag's new products being displayed at the expo can be used in the aerospace industry and as medical equipment, both of which require high-precision processing. He said that Starrag hopes to find Chinese partners in the manufacturing industry at the CIIE.

"The CIIE is an important event for us and we will participate in next year's expo as well," said Walti.