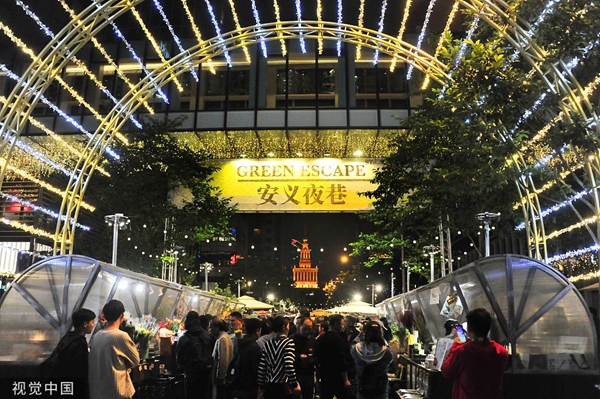 The nighttime economy in Shanghai is thriving, transforming the city into a haven for night owls.

During the Shanghai Shopping Festival from Sept 20 to Oct 20, 100 major enterprises in Shanghai reported earnings of 18.86 billion yuan ($2.70 billion), with the revenue coming from activity after 7 pm increasing by 22.6 percent over last year, according to the city's business development research center.

An increasing number of places in the city are open at night, including tourism attractions, cultural institutions, and commercial blocks.

A variety of nighttime programs have been launched, including a night run along Riverside Avenue and a light show in the Yu Garden.

The Shanghai municipal government has been striving to grow the nighttime economy by providing support through various departments.

On Oct 26, two night market streets in downtown Shanghai opened to the public thanks to joint efforts from the local government and venders. The markets offer delicious food and creative cultural products, as well as fashion shows and street performances.