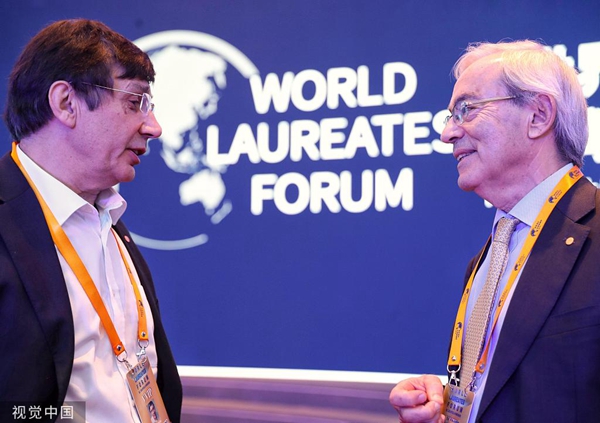 Scientists from around the world participate in the 2nd World Laureates Forum in Shanghai. [Photo/VCG]

The 2nd World Laureates Forum, attended by the world's top scientists, is being held in Lingang New Area, Shanghai from Oct 29 to 31.

This year, attendees include 44 Nobel Prize laureates and 21 winners of other world-class science and technology awards, such as the Turing Award, the Wolf Prize, the Lasker Award, and the Fields Medal.

The laureates, together with over 100 academics, young leading scientists, tech entrepreneurs, and financiers from China and abroad, will provide insight into the development trends of advanced technology and offer advice on how to build Shanghai into an innovation hub with global influence.

A number of sub-forums and dialogues on scientific innovation will also be held.

The forum will cooperate with academies, universities, research institutes, innovative enterprises, and investors to hold summits on a variety of topics such as AI and 5G technology, integrated circuits, innovative drug R&D, brain science, and new energy.

The forum, whose tagline is "Science and Technology for the Common Destiny of Mankind", is hosted by the local government of Shanghai and was launched by the World Laureates Association.

According to the event's organizer, four of this year's Nobel Prize laureates -- William Kaelin and Gregg L. Semenza in Physiology or Medicine, and Michel Mayor and Didier Queloz in Physics -- will also participate in the forum.