Laureates, Shanghai team up in plan to open sci-tech center 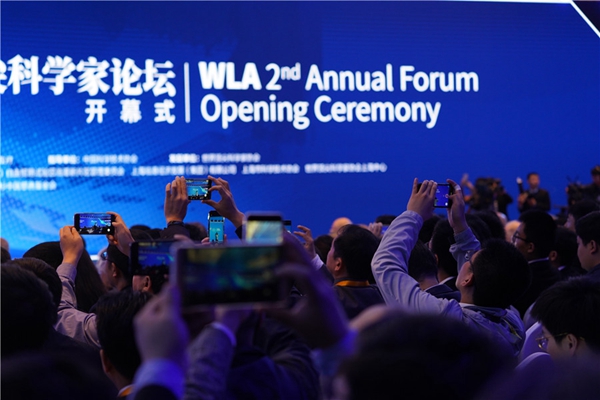 The Hong Kong-based World Laureates Association and the Shanghai government on Tuesday announced the establishment of the association's Shanghai center in an attempt to gather the resources of top-notch scientists from around the world amid the city's efforts to become a scientific innovation hub with global influence.

The World Laureates Association Shanghai Center will be based in Pudong district's Lingang area, home to Lingang Sci-Tech City and a newly added part of the China (Shanghai) Pilot Free Trade Zone. The new center released a 10-year outline－including the country's first scientific community for top scientists from around the world－that combines innovative labs and high-quality residential facilities to bring about more scientific innovation.

The establishment of the center was announced at the second World Laureates Forum, which attracted 44 Nobel Prize laureates and 21 other world-class award winners. The three-day forum opened on Tuesday in Shanghai, and President Xi Jinping offered his congratulations in a letter.

Xi noted in the letter that China attaches great importance to the development of the frontier fields of science and technology and is committed to promoting global cooperation in sci-tech innovation.

China will strengthen international sci-tech exchanges with a more open attitude, and help transform the wisdom and research achievements of Chinese and foreign scientists into a powerful momentum for economic and social development on the basis of platforms such as the World Laureates Forum, Xi added.

He expressed his hope for the representatives to the forum to promote basic scientific research, advocate international cooperation, support growth of young talent and contribute to a better future for mankind.

The forum, which also gathered over 100 academicians and leading scientists from home and abroad, is intended to serve as a platform for scientific collaboration and applications to address important issues, such as artificial intelligence, brain science, innovative drug development, new energy as well as black holes and aeronautics and astronautics.

The forum organizers－Lingang Group, the Lingang administration committee of the Shanghai FTZ, the Shanghai Association for Science and Technology and the newly announced World Laureates Association Shanghai Center－said that the center will push forward collaboration with the country's science and technology authority, local governments and State-owned and private enterprises to ultimately assist Shanghai to become a source of original technology and innovative industries.

Lingang Group said that the World Laureates Association community, construction of which will begin in 2020, has signed collaboration agreements with 40 world-class scientists, mainly in the fields of biomedicine, AI, new energy, new materials and quantum science. This could allow Lingang to lead Asian tech communities in gathering numbers of top-notch scientists.

The community will encourage scientists and their teams to promote the implementation and industrialization of relevant projects in Shanghai.

Roger Kornberg, World Laureates Association president and a winner of the Nobel Prize in chemistry in 2006, said that the center "will make important contributions to science innovation in Shanghai, China and the world".

Shanghai Party Secretary Li Qiang said that Shanghai will stick to openness and innovation to promote the city's involvement in the global scientific and technological innovation network and achieve win-win collaboration with scientists from around the world.