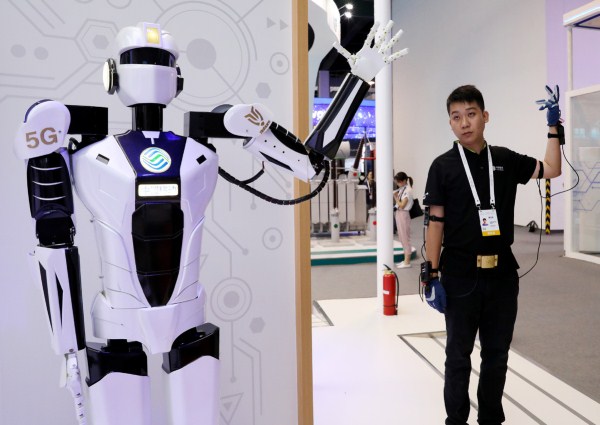 A staff member (right) demonstrates the 5G-based remote control capabilities of a robot during the World Artificial Intelligence Conference in Shanghai, Aug 29, 2019. [Photo/Xinhua]

SHANGHAI - Shanghai on Saturday issued a three-year action plan to boost the development of its artificial intelligence (AI) industry, aiming to build itself into an AI highland by 2021.

According to the plan unveiled at the closing ceremony of the 2019 World Artificial Intelligence Conference, Shanghai will subsidize key AI projects with 30 percent of their investment. The amount of subsidy for each project will be capped at 20 million yuan ($2.8 million).

An investment fund for Shanghai's AI industry, with an initial target scale of 10 billion yuan, was also established Saturday to offer financial support for future AI projects in the metropolis.

A total of 33 AI projects, including IBM's AI innovation center and Kuang-Chi's global AI innovation headquarter, were signed at the WAIC closing ceremony.

Since last year, AI has risen to Shanghai's priority development strategy, according to Wu Qing, vice mayor of Shanghai. There are more than 1,000 core AI enterprises and more than 3,000 pan-AI enterprises in the city. The scale of related industries exceeds 70 billion yuan, taking the lead in the country.