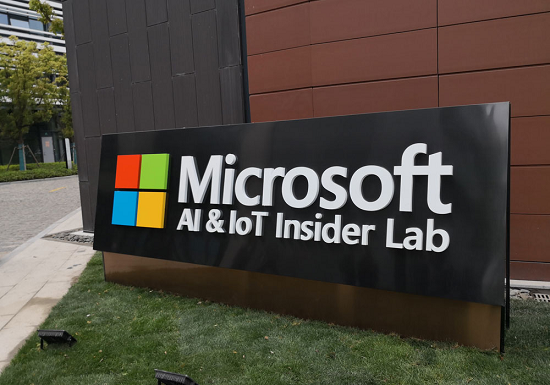 Microsoft's biggest research lab exploring artificial intelligence and the internet of things is scheduled to begin operations in Shanghai on May 15. [Photo by He Wei/chinadaily.com.cn]

Taking advantage of the leading industries of Zhangjiang Science City, the AI zone has welcomed a batch of new residents including global organizations like Microsoft and IBM as well as Chinese corporate stars such as Alibaba.

Microsoft's largest research lab for AI and the internet of things (IoT) opened in AIsland in May, dedicated to deepening the integration of AI and the IoT by providing companies with hardware and software assistance as well as cloud and AI solutions.

Microsoft has brokered partnerships with 30 innovative small and medium-sized enterprises and is conducting technical research in frontier areas by leveraging its software and hardware resources and cloud services, said Lin Miaojing, project director of the Microsoft AI and IoT lab.

Those in the know say AI startup CloudWalk Technology is on course to settle in the area and hopes that Zhanjiang can be the starting point where the company expands nationally and even globally.

Officials say that with its aims of developing into an AI landmark in China, the island is expected to evolve into a dynamic AI industry cluster with a great influence in China by 2022.

The area will host over 8,000 research and development personnel who will develop the best AI applications, said Han Lu, deputy general economist of Shanghai Zhangjiang Group Co Ltd, the operator of the zone.

Officials said it is hoped that the digital economy of the island will be worth some 300 billion yuan ($43.62 billion) in three years, through attracting digital related projects in such areas as big data, cloud computing, blockchain, virtual reality and augmented reality.