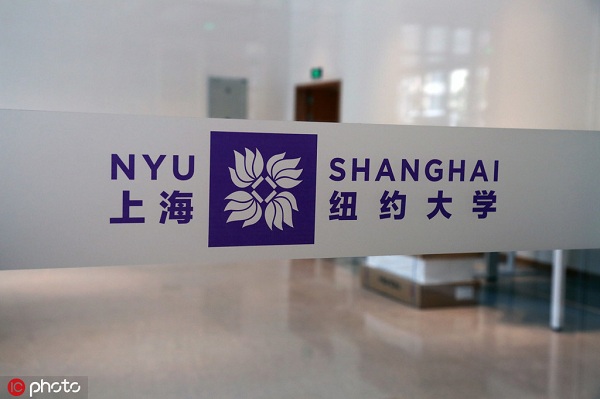 Located in the New Bund of Pudong District (Qiantan Area), the construction covers more than 110,000 square meters and is expected to be completed by 2022. The new campus can accommodate up to 4,000 undergraduate and graduate students.

"This construction marks an important step forward not just for NYU Shanghai, but also for Shanghai's ongoing efforts to advance education reform and its growth as an international metropolis," said Yu Lizhong, chancellor of NYU Shanghai.

The campus is designed in both Chinese and Western styles, "which brilliantly expresses our school's unique devotion to uniting China and the rest of the world in a shared commitment to transformative education and research," said Jeffrey S. Lehman, vice chancellor of NYU Shanghai.

The new campus is about twice as large as the current one in Lujiazui Financial and Trade Zone, which is to meet the needs of the growing number of students and more diverse lessons.

"It has been designed to express the value of international cooperation. It's designed to show that borders between intellectual disciplines are artificial and greatest innovation happens when borders are crossed," Jeffrey said.

Founded in 2012, NYU Shanghai is regarded as a pilot program in China-U.S. educational cooperation.

NYU Shanghai now has more than 1,300 undergraduate and graduate students from over 80 countries and regions, about half of whom are international students. Among them, about 60 percent are American students. Students from countries participating in the Belt and Road Initiative also account for a large proportion.

According to the administration office, the number of applications to NYU Shanghai jumped 25 percent this year to a record high of 16,750 and applicants competed for 450 spots in Fall 2019's freshman class.

"I am confident that the new Qiantan campus will play a crucial role in the district, embody the spirit of Shanghai and give back to the city through talent, motivation and research output," said William R. Berkey, chairman of the NYU board.