Incubators have helped some foreign entrepreneurs in the city push forward their business plans.

Angot said an incubator helped him and his co-founders apply for and obtain entrepreneur visas.

"It also introduced us to the right business opportunities and helped us build more connections with the industry," he said. 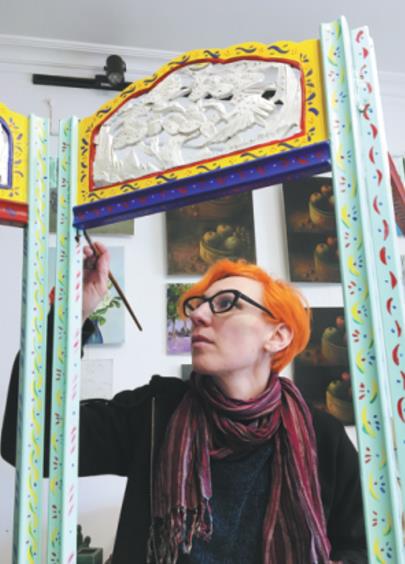 Barbara Vaccaro from Italy, who started her business Barbara Art Studio in a Songjiang district-based incubator in January, said that while she and her husband are not high-level experts with knowledge of preferential policies, the process went smoothly.

"The incubator helped me understand all the paper work for the license and visa application. We got the business license within two weeks, which was incredible and much more efficient than the European practice," said Vaccaro, who relocated to Shanghai six years ago and has been amazed by the burgeoning local art market and the speed with which new art museums have opened in the past years.

Vaccaro said she plans to stay in the city for a long time, adding that her son goes to a local kindergarten and speaks perfect Mandarin.

She said she believed that state visits and more frequent people-to-people exchanges will improve relations between the two nations. Chinese President Xi Jinping took a three-nation European tour to Italy, Monaco, and France in March.

"In the past, when Chinese people learned I'm from Italy, they talked about Rome and pizza to me. But now I believe we both understand that we can really work together to facilitate cultural, trade and commerce exchanges," she said.

Lin from Kudosbay, where 500 enterprises mainly involved in international service and product trade have gathered, said Shanghai aims to have 800,000 foreigners among its permanent residents by 2035 and one key to achieving the target lies in the attractiveness of the services of agencies, including incubators.

"Incubators should not only provide free internet and space. Instead, we should address actual difficulties from explaining government policies and social security regulations to advising how to overcome cultural barriers and talk to Chinese business collaborators effectively," he said.

So far the city has granted talent visas to foreign entrepreneurs whose business fields are included in the city's current catalog of high-tech industries. Some experts suggested that the city should also grant such visas to those in the emerging service sector, such as cultural creativity, new media, and financial technology.

"I suggested that authorities organize an expert panel to evaluate such startups in terms of their innovative features, innovative levels and talent standards," said Huang Yejing, a researcher with the Institute of World Economy affiliated with the Shanghai Academy of Social Sciences.

"If they are qualified, they can also register in an incubator with preferential support and be granted talent visas," she said.

Lin said that the expat entrepreneurs' experience, cultures, networks and knowledge will benefit the city's development by promoting diversity.

"That's why even if a Chinese person and an expat work on the same business plan, they usually take completely different approaches and end up with different solutions and products. Such differentiation is desirable amid China's business network development," he said.