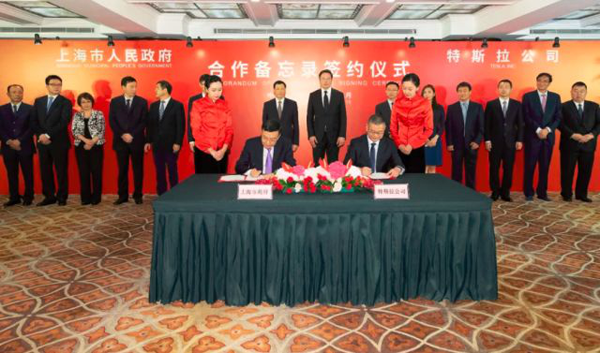 The Shanghai municipal government and Tesla, the US-based e-car manufacturer, ink a deal to construct a super factory in Pudong on July 10. [Photo/sina.com.cn]

Tesla, the US-based e-car manufacturer, announced a deal with the Shanghai municipal government to construct a super factory in Lingang area, Pudong, Shanghai, on July 10.

The plant, which is expected to produce 500,000 electric vehicles a year, is the city's biggest ever foreign-funded manufacturing project.

Elon Musk, co-founder and CEO of Tesla, said that the plant will be the company's first overseas super factory, and also the most advanced. He expected its construction can be finished as soon as possible.

Musk also explained why Shanghai was chosen as its location, saying that the city's strong innovation capacity and large number of talented professionals gave it the edge over other potential locations. 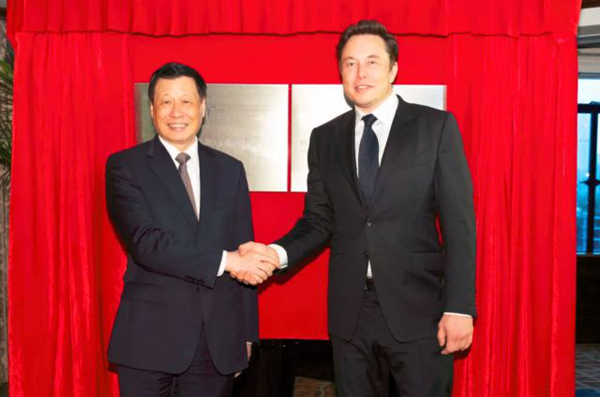 Ying Yong (L), mayor of Shanghai, and Elon Musk (R), co-founder and CEO of Tesla, announce the building of a subsidiary and an e-car R&D innovation center of Tesla in Shanghai on July 10. [Photo/sina.com.cn]

Ying Yong, mayor of Shanghai, said that the city will give its full support to the construction of the Tesla plant and will continuously strive to create a better operating environment for companies based in Shanghai, including Tesla.

Additionally, the agreement also included plans for the setting up of a subsidiary of Tesla in Shanghai that integrates R&D, manufacturing and marketing, as well as an e-car R&D innovation center to promote e-car innovation and the development of e-car technology.