Michael Kruppe, along with three other foreign expats, received the 2017 Magnolia Award on Sept 6 in Pudong New Area, Shanghai, in recognition of their special contributions to economic and cultural industries in the district.

Born in Germany on Sept 18, 1965, Michael Kruppe is fluent at German, English, French and Chinese. He has been in Shanghai for 14 years, since his first arrival in 1989. Now he has been appointed as the general manager of Shanghai New International Expo Centre Co., Ltd. 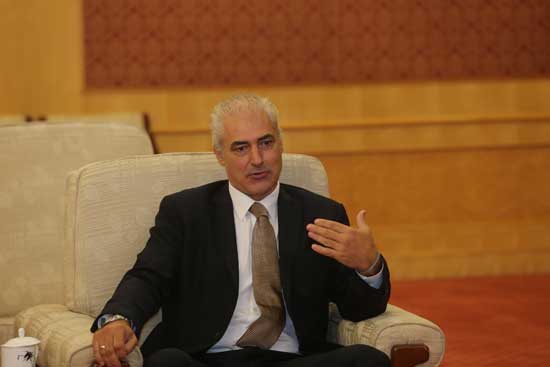 Michael was honored as one of the 2016 China convention and exhibition economic personage.

Michael tries to make the most use of all fairs and expos, introducing more and more products made by German medium and small enterprises into Shanghai, as well as other regions in China, and helping export Chinese products to Germany. He contributed a lot in the economic and trade of Sino-German cooperation.

Michael is interested in playing football and spares no efforts in training the Chinese youth. During the latest foreign exchange activity, he played an important role in the settlement of FC Bayern Munich, also known as Bundesliga or Champions League, in Shanghai.

As the deputy president of Asian-Pacific Area of Union of International Fairs (UIF), and the CEO of Shanghai Germany Center, he promoted Shanghai to the world-wide conference sponsors and government officials at many international conferences, introducing the city’s advantage in infrastructure, culture, environment, location and administrative efficiency.

With more and more international expos being launched in Shanghai, Michael was happy to see numerous exhibitors, purchasing managers, businessmen, visitors as well as relevant enterprises come to Shanghai consequently, which has also been a large driving force to the city’s development.