The Zhangjiang National Innovation Demonstration Zone is optimizing its space planning, industrial structure and talent teams, according to a plan to build a world-class high-tech zone and a technological hub.

By doing this, the zone's administration aims to increase local innovation capacity, develop emerging industries, integrate and use both domestic and international resources and improve the local environment for innovation and entrepreneurship.

As China's third independent innovation demonstration zone approved by the State Council, the Zhangjiang zone is a pilot area leading the progress of Shanghai's efforts to strengthen its global influence in scientific and technical innovation. 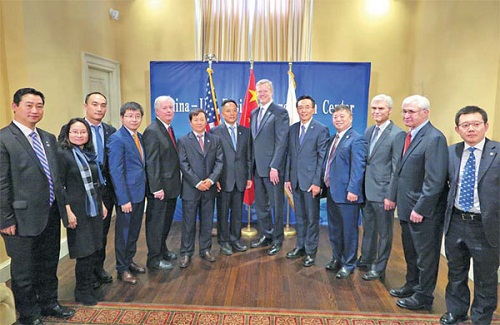 The China-US Business Innovation Center is established in March 2015 in Boston. One of its founders is the Shanghai Yangpu Entrepreneurship Center. Photos Provided to China Daily

The Shanghai Pudong Software Park in Zhangjiang is lit up at night.

The zone has preferential policies to cover knowledge-based industries and allow these industries to grow alongside urban development.

Zhangjiang has been designed to be a national comprehensive scientific center, and the government has planned three innovation belts in its east, north and southwest, expanding their innovation capacities to southern Jiangsu province, northern Zhejiang province and the coastal areas.

In the innovation belts, the government has planned seven innovation clusters and 85 innovation bases for specific emerging industries.

Local officials said they will continue to help the zone in economic restructuring and integrated development.

The administration of the Zhangjiang zone has been focusing on a number of major industries including next-generation information technology, high-end equipment manufacturing, biotechnology, new materials, energy conservation and environmental protection.

It is nurturing pilot industries such as new energy development and new energy vehicles.

It is also paying attention to the modern services sector and integration of technologies and cultural businesses.

A number of world-leading projects are being commercialized.

The terahertz radiation technology and product center has developed a series of products for airports, subway stations, customs offices and plazas.

Construction of the stem cell preparation and quality examination center in the stem cell translational medicine industrialization base has been completed.

Ten automated production lines for the capsule endoscope robot project, as well as its automatic test system and chip evaluation system, has been completed and started operation, and the products have started clinical use.

The total revenue of companies in the zone reached 4.37 trillion yuan last year, with profit of 259.14 billion yuan.

The local government is attempting to build a competitive human resources management and services system to meet the local demand for trained professionals.

It has implemented more than 30 new policies concerning international talent attraction since 2015. It started the application of permanent residence for overseas professionals and gave stronger support to startups.

The age limit of 60 years has been removed for overseas personnel in some key sectors. Overseas graduates from Chinese universities enjoy preferential policies in Zhangjiang.

A market-oriented human resources service system has been established in the zone, including a pilot lab integrating research, study and production, and a training and practice center for key industries.

In 34 countries and regions around the world, the Zhangjiang administration has established overseas talent-development bases to integrate them with technology, projects and capital.

The administration is promoting mechanisms for innovative talent evaluation, talent development and encouragement to optimize the innovation and entrepreneurship environment for global professionals.